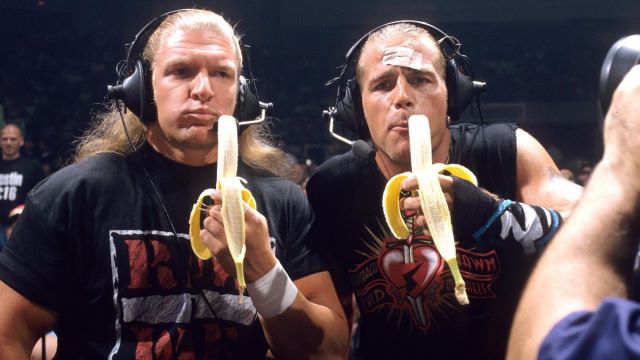 One of the most influential moments in late 90s/early 00s culture.

Oh to be 13 again and watching The Rock, Stone Cold & DX raising hell on Monday Night Raw (aired on Friday in the UK but whatever). If you were around for the infancy of wrestling’s Attitude Era, there was no one cooler or more influential than DX.

23 years ago this week, HHH & HBK christened the group – which also included Chyna & Rick Rude (both dead now – RIP) – for the first time:

“We are D-Generation X. You make the rules and we will break them”

What made DX so influential among popular culture back then? Quite simple – the crotch chop AKA the suck it sign:

Back in the day, if you pulled off the perfect suck it sign, you felt as cool as HBK and Triple H (and X-Pac later on). Scored a sick goal on your mate or hit them with a good burn? You hit them with the crotch chop for good measure. That’s just how it was back then.

Let’s not forget the legendary DX theme music either:

If you think about the madness this lot got up to – invading WCW Nitro with a tank, trolling Vince McMahon, going to war with Stone Cold – they really are among the top-tier factions in wresting history, second only maybe to the nWo.

Then again – Mike Tyson was never a member of nWo:

Why can’t wrestling be this epic in 2020 eh? Oh well, we’ll always have the memories.

For hilarious footage of The Rock meeting the nWo for the first time and making them look like utter jabronis, click HERE.