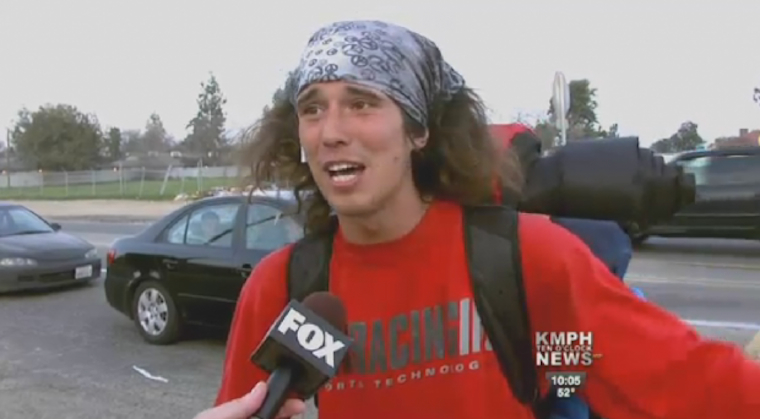 A hitchiker tells us how he brutally killed a 300lb mental rapist/murderer who thought he was Jesus with a hatchet in one of the best televised interviews in history.

It seems that Wayne LaPierre may have to amend his views on what can stop bad guys after an incident in Fresno California.

The events unfold like the plot of typical low budget slasher movie; a hitchhiker gets picked up by a regular Joe who then predictably turns into a homicidal mentalist. But instead of ending up as a sticky mess at the business end of a wood chipper, our hero turns the tables on the bad guy and buries a hatchet in his head right in the middle of the street! Or as our hero so eloquently puts it, “smash, smash……. SMAAASH!”

Now I won’t recount the events verbatim as our hero, Kai, does a great job of that himself in the full, unedited interview.  He’s a truly ‘excellent’ raconteur but make sure you pay extra attention to hear all the grisly details, such as the bit where a man with his head cleaved in two masturbates outside the local school gates. God bless America!

Check out the video below, and props to Rory Bentley and Bogi Szabo for originally bringing this to our attention also. This is kinda NSFW because there’s a lot of swearing in it so if you’re in the office put your headphones in or something.

Great interview/story huh, but let’s focus on the enigmatic, long haired hippy hero, Kai. He’s a confusing character, effortlessly dropping into the interview and using it as platform to broadcast his mantra of peace and love before telling us how he split someone’s skull open

Kai talks like a real veteran of the road. He’s obviously spent a lot of time riding freight trains because he knows that if you move someone when they’ve been slammed, they’re gonna bleed out. Beat that Bear Grylls!  His knowledge of violence also gives him the power to tell when a guy is big enough to snap a girl’s neck ‘like a pencil stick’. Precise call Kai, but given the size of the girl in question, the bad guy must have been really HUGE for this to be even remotely possible.

Kai’s mystery runs deeper still. He states quite clearly that he loves surfing and skating but doesn’t own a board of any kind and even uses his big TV hero interview to ask for a board to borrow. Trouble is, Fresno is about 100 miles from the coast, up in the dusty hills of farming country. Maybe the blood lust had gone to his head?

Now, Kai obviously smokes a lot of pot but he’s incredibly lucid. I can only image that if he talked to Frank a little more, he’d be smashing heads on Wall Street rather than Main Street.

So maybe that’s it. Maybe Kai’s not a real person, maybe he’s an alter ego. Some bored billionaire was desperate to absolve his sins but decided that the Batman look was now too clichÃ©d. So instead he created a new kind of superhero.  A Super Tramp. The Baked Crusader. The Littlest SuperHobo. After all, who would suspect a lowly beach bum from Dogtown, who’s ‘dead to his family’ of being some bored billionaire. Nobody, that’s who.

This would also explain why the police seem to let him go even when he’s been caught cracking skulls and smashing teeth!

Whoever he is, for now Kai must hit the road. Because he’s the hero Fresno deserves but not the one it needs right now.