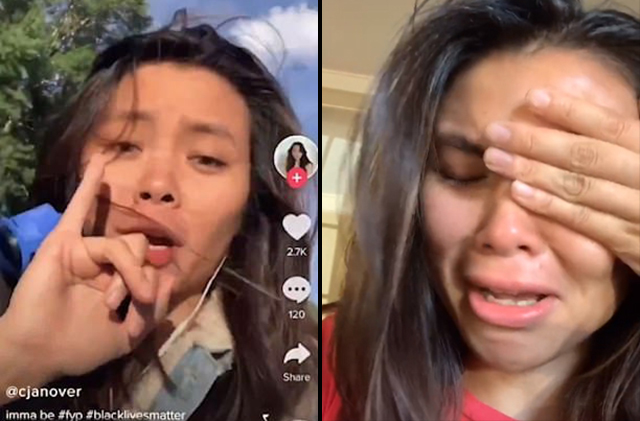 A Harvard graduate who made an analogous joke about stabbing anyone who says ‘All Lives Matter’ has lost her job at accounting firm Deloitte after a bunch of people forwarded the video to her employer and kicked up a fuss over it.

Claira Janover made the viral TikTok video earlier this week, saying she would stab anyone who says ‘All Lives Matter’ and then show them a papercut and say ‘my cut matters too’. The footage below features the original clip alongside another clip of Claira crying after losing her job:

Cry me a river, cupcake. pic.twitter.com/xhxTaPUITC

Personally I think it’s unfair that she or anyone else could lose their job over remarks like this, especially since it was obviously just an analogy and she wasn’t literally threatening to stab anyone. At the same time though she does seem like one of these aggressively “woke” types who would be happy for anyone who disagrees with her to lose their job, and so I guess this is just another example of cancel culture coming full circle.

Even still, I can understand why a company like Deloitte doesn’t want to be associated with someone making stab threats, literal or not. Here’s another video Claira uploaded lamenting her situation:

“Trump supporters took my job away from me”

Seems the right have taken a page out of the left’s book and will now be using “cancellation” as a weapon too. Careful what you say online, everybody. When did politics turn into such a chaotic shit show?

For the A+ response Domino’s Pizza gave to people trying to cancel them over an 8-year-old Tweet, click HERE.