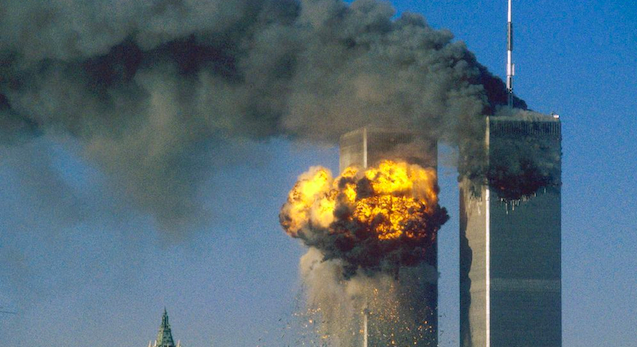 Two braindead girls actually thought it would be a good idea to dress as the Twin Towers for Halloween. Surprisingly, someone agreed with them.

In the height of bad taste, two university students from Chester named Amber Langford and Annie Collinge, both 19, decided to make homemade Twin Towers costumes for Halloween and go out to a local club in them to celebrate. To make their decision even stupider and in some ways even condone/justify it, the DJ at the Halloween clubnight they were at decided that they had the best Halloween costume in the club and awarded them £150 worth of shopping vouchers. Yep, pretty much everyone involved in this sorry incident put their foot in it.

The two girls have apologised saying ‘they meant to cause no offence.’ Here’s their full statement: ‘We never meant to be offensive, but we apologise if any offence was caused. The idea was to depict a serious, modern-day horror that happened in our lifetime and was not intended as a joke’

I guess being around 7 at the times of the attacks may have desensitised them slightly to the huge cultural significance of them but I think even that’s a push because there’s just no way you can’t consider a costume such as that being a complete faux pas unless you’re completely and utterly braindead. I guess they are at University of Chester so this could be possible.

As for saying they wanted to depict a modern day horror –  go draw a mural or make a plaque or something, Halloween isn’t exactly known for its seriousness. Again, the two girls come across as being complete and utter morons. 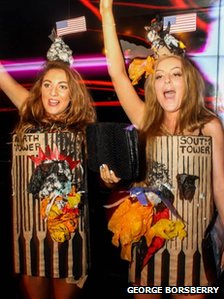 The University of Chester and its Student’s Union has reacted well to the news, completely condemning both the girls, the club and the DJ where the incident took place. A joint statement from the two organisations reads as follows: ‘Both organisations have begun an urgent investigation into the circumstances around which these images have been taken with a view to taking the necessary action.’

This needs to be followed by the footnote that a university spokesman has said that they’re actually unsure just what action can be taken as a result of their actions, which kind of implies nothing will happen. I don’t think they really need to be expelled or fined or anything though as I think the shame and embarrassment of having the whole university (and to a lesser extent the nation) laugh at them and think they’re knobs is probably enough punishment. They also had to give back their shopping vouchers which probably devastated them.

The club where the girls went has also apologised for their part in the event, saying that one of their DJs made a ‘serious error or judgment’ in awarding the girls the prize. No shit.