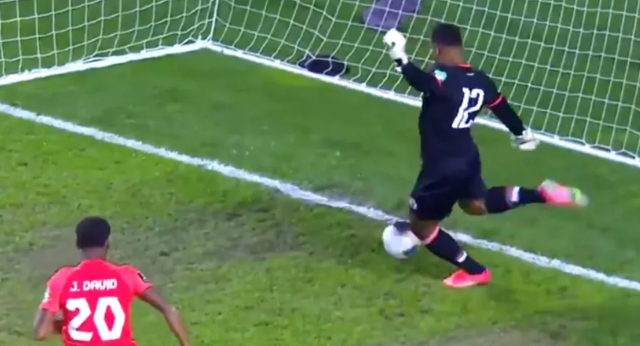 How is this even possible?

With Copa America and the Euros in full flow, no one’s really been paying attention to the CONCACAF World Cup qualifiers, which is probably good news for Haitian goalkeeper Josué Duverger.

The guy dropped an absolute clanger to gift Canada their first goal in what turned out to be a 3-0 defeat for Haiti, resulting in what many are now calling the worst own goal ever scored in football.

Just get a load of this…

What a shambles. Especially as he’d apparently had a very good first 45 minutes only to go and do that in the opening minutes of the second half. It’s so bad you’d think there was some match fixing going on, except it would be so hard to score an own goal like that even on purpose. Plus if you’re going to matchfix you don’t do it in a way that’s guaranteed to go enormously viral, right? Honestly I can’t stop watching it – it’s just such an absurd own goal.

It turns out that Duverger wasn’t even supposed to start the game; the first choice keeper got denied a VISA resulting in a late switch. Even still, he should have done better. Maybe check his betting account just to be sure.

For the massive fight that broke out during a Brazilian football game after a player stripped naked to celebrate a goal, click HERE.