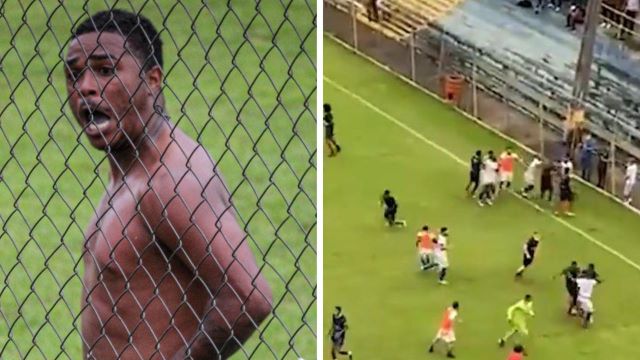 So apparently this happened back in December but is only doing the rounds now after Emerson Carioca picked up an 8-match ban for celebrating his 95th minute winner againt Maricá by stripping naked.

The Brazilian winger flashed his genitals at opposing players and staff after his goal saw Sampaio Corrêa through to the finals of the Rio de Janeiro state league 2nd division, which was to decide which team would be promoted to 1st tier:

Fight after he showed his genitals 👇pic.twitter.com/zilNEetC9w

Rio de Janeiro state league 2nd division: Semi-final between Sampaio Corrêa and Maricá to decide which team would be promoted to 1st tier

Emerson Carioca scored the winner for Sampaio Corrêa at 95′ and then showed his genitals to Maricá players and staff pic.twitter.com/TFADIbR0Cz

As per The Sun, despite leaving Sampaio Correa to join Portuguesa Carioca, Emerson has still been handed an eight-game ban after his actions sparked a riot.

Even still, what a move by Emerson Carioca to strip naked and rub his cock and balls all over his opponents’ faces after clinching a 95th minute winner. I mean imagine scoring the winner in the final minute of a crucial game against your rivals. You barely have any time to figure out how you’re going to celebrate! Does he do the heart move with his hands? The Aubameyang front flip? Slide into the corner flag? Nah – he’s gonna take all his clothes off and flash his butt cheeks and make sure it stings the opposition as much as possible.

Which means you can’t really blame them for trying to beat the shit out of him afterwards. Can’t have someone destroy your hopes and dreams with the last kick of the game and then celebrate by getting naked in front of you. The best part about it though is that Carioca isn’t even on the team anymore! And he STILL got hit with an 8-match ban. Sucks for his new team but I have a feeling that in Carioca’s mind – it was totally worth it.

For the football fan who dug up his granddad’s skull so he could celebrate his team’s historic win, click HERE. Yup, South America again.