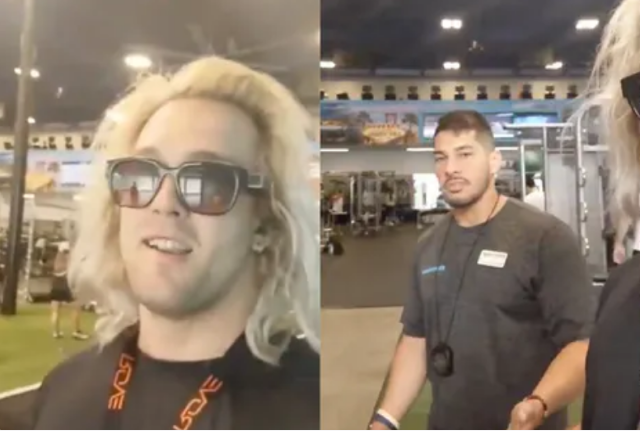 Twat of the week.

Frontrunner for bell-end of the week is this gym bro over in the States throwing a tantrum after being told his gym membership was revoked because he had sexually harassed a woman on the premises.

This BTEC lovechild of Ric Flair and Jimmy Saville has to be up there with some of the biggest twats we’ve ever featured on these pages. Get a load of this…

I mean the lack of self-awareness here is just staggering. The long blond hair, the sunglasses indoors, the fact he believes anyone watching this footage is going to side with him… it’s actually unbelievable. Not to mention his complaint that he’s being punished “cause I hit on a b*tch”, as if that’s gonna do him any favours whatsoever.

According to this Redditor, he had even filmed his failed chat-up attempt on the woman in question…

Just next level narcissism. I guess that’s what it takes to be the sort of person who doesn’t take the camera off themselves for even a second while being booted out of a gym. Big up the employees who handled the whole thing with the utmost professionalism. Actually impressive when you consider the levels of douchebaggery on display.

To watch an anti-masker dickhead make such a scene in a gym that he gets arrested, click HERE.