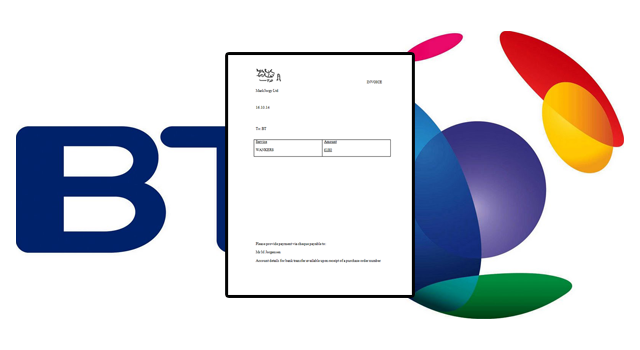 The result is pretty much perfect…

A dude called Mark Jorgensen sent this story in about his experience with BT and how they ripped him off for a year and then didn’t even give him a good internet connection that he could get a decent stream on. When he tried to fix it, BT just fobbed him off and switched him round a bunch of different departments without giving him an answer. I’m sure a lot of people reading this can relate to that, not necessarily from BT but from a bunch of other dumb companies trying to fob their customers off.

Mark came up with a pretty sweet solution to his problems though – he wrote them a really disparaging and insulting letter of complaint that just might be the greatest complaints letter of all time (just edging this one from a guy made to sit next to an obese passenger on a plane) and then invoiced them as ‘wankers’ for the money that was owed him.

He probably thought that this was just going to make him feel a bit better about the whole situation, but it actually worked and he got pretty much everything that was owed him and his internet finally fixed. He also managed to get props from Derren Brown on Twitter which is pretty cool too.

Check out the full extent of what went down below:

*It’s important to note that with this email I copied in the personal email of Joe Garner, CEO of BT Openreach/Broadband*

Usually when I complain to companies, I have a pretty regimented structure which goes thusly:

Intro with a compliment to gain trust
Some form of ridiculous whimsy or other
Then the crux of my issue, interspersed with whimsy
Some more (underhand) compliments
Some more whimsy
A mad cap demand
Not necessarily a blue print for a complaint letter, but it works for me.

The problem is that every time I sit to write to BT, you aggravate me so much that I get overcome with dormant APE RAGE and can barely type three words before mashing the keypad and screeching like a baboon with a fire ant in its anus.

So rather than being disingenuous and trying to keep to this format, I’m simply going to list my grievances, with the odd generic insult thrown in to lighten the mood:

My internet doesn’t work properly and, in a way, never really has.
My internet cuts off intermittently
You voted for UKIP
BT can’t fix any technical problems
You don’t have bilateral symmetry
BT seem relatively disinterested in technical faults
BT cannot follow very, very simple billing instructions
The ultrasound of your baby looks like an electric frog
Nobody at BT has any comprehension that as a customer, I have no knowledge or interest in the organisational structure of your company
Your overseas call centres — which generally I have no problem with whatsoever — seem to be full of people who can only speak the English words on the script in front of them. Phonetically.
You don’t pronounce the word cavalry correctly
Upon querying my billing amount, you have been over-billing me by approximately £15 per month for the last year. Maybe two. The rate I’ve been on is overpriced and particularly for services I don’t need and the ones I do don’t work.
You are the worst company prefixed with ‘British’, and BP killed all those swans with petrol or whatever.
Any query results in being passed to several departments and having to re-explain the issue to several different people who don’t give a solitary shit.
You attract spiders
The additions include several telephone-oriented ‘bolt on’ services you have added despite me repeatedly telling you I don’t use a home phone. The line is for the internet only.
You are delighted by the plight of endangered animals.
I never get a call back when I request one
In relation to point 7, I asked for my billing date to be changed, anticipating some moving around of money in accounts, you assured me this was done.
In relation to the above, you didn’t change and I was cut off immediately
You chew with your mouth open.
Paying particular attention to points 1, 2, 4, 5, 12, 14, 21 and an addendum of the fact that I’ve been paying for high speed internet, yet your engineers tell me I’ve been getting roughly a quarter of the speed I pay for, I am at the end of a very long shit-smeared tether of incompetence.

Back to a list, here is what we’re going to do

I have attached an invoice for the overbilling, which if we do the math(s):
A conservative guess on timescales of this would be around 12 months.

*Please note that this is extremely conservative as it does not include the additional charges I have incurred from my mobile phone provider for overusing 4G when my wireless regularly doesn’t work.

This invoice must be paid into the bank account details on the invoice within 30 days with a payment reference of WEPROBABLYKILLEDJESUSTOO.

I will consider a counter offer.

An engineer must unequivocally repair my internet within 7 days.
(This is attempt number 6 to get this so, for reference

restore (something damaged, faulty, or worn) to a good condition.

“faulty electrical appliances should be repaired by an electrician”)

An apology in the form of a limerick.
Failure to adhere to these points will result in the immediate cancellation of all BT services and the passing of owed monies to a collections team. 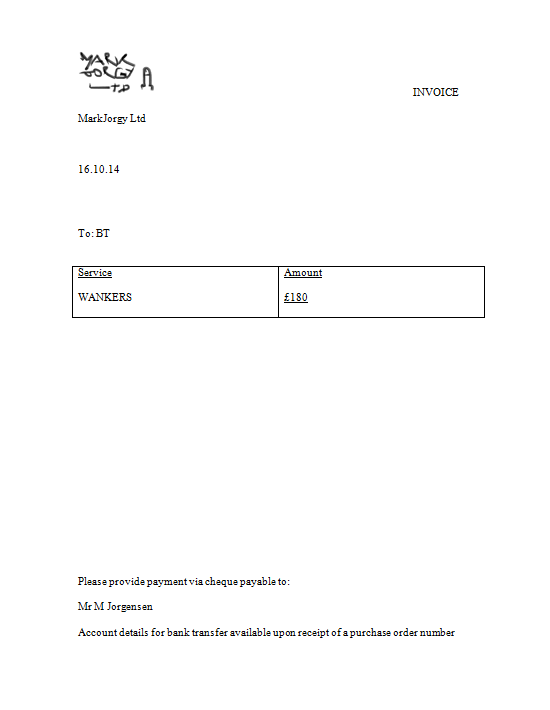 Thanks for your time today.

As we discussed I have refunded the incorrect charges on your bills over the last 12 months.

I have removed the caller display service, Broadband Talk and arranged for the BT Sports to be free for another 12 months. Please see the below breakdown of these charges refunded

Due to the excess usage charges you received when you first joined BT for broadband I have agreed to refund £38.05 towards this cost, the total refund calculated is £100.00 this will be sent you via cheque in the next 10 working days.

In relation to your broadband issues this has been passed to BT’s high level escalation team, as soon I receive any further knows I will keep you informed.

If BT are able to resolve the broadband speed and drop in service I will look at adding a new broadband contract to your account which will result in a cheaper package. I don’t want to make any changes to your account though until you are happy with the level of service you are receiving.

I will check the progress of your broadband on Friday and give you a call, but if you need anything in the meantime please give me a call or drop me an email.

This is great Nicola, thanks a lot for your help.

Any chance of that limerick?

You are very welcome,

Hahaha I am not sure my limerick skills are up much Mark, especially with the last essay. J

There was a young lady called Nicol-
-a girl who helped Mark in a pickle
She gave him some cash,
They still had a laugh,
But she respectfully bowed out of a riddle
🙂
*SORTED!!*