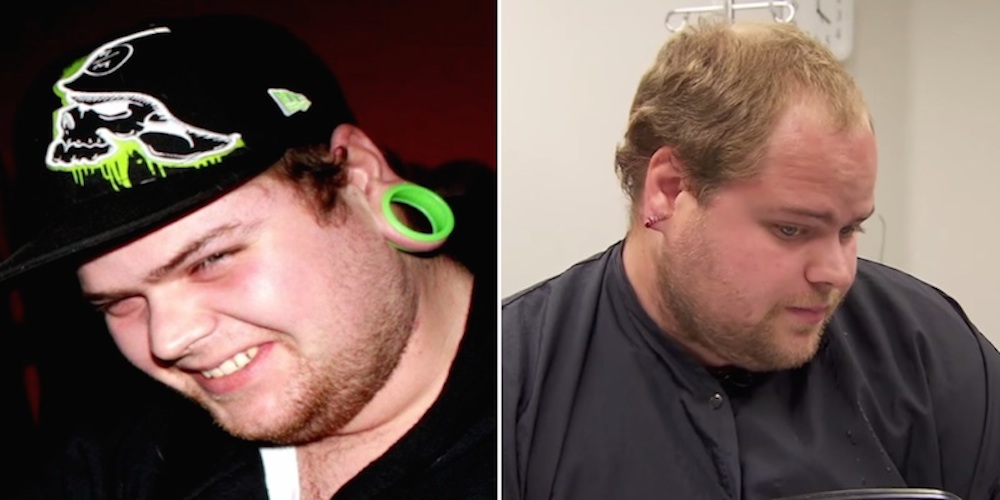 Think before you get your ears stretched because I doubt you’re going to want to go through this.

Back when I was growing up, because I was a punk or ‘alternative’ kid I would always see people with their ears stretched really hugely and wonder what the hell they were thinking: I never thought it looked that good and more importantly you couldn’t cover it up like a tattoo (with another tattoo or clothes) or take it out like a piercing, so you were literally going to be stuck with holes in your ears for the rest of your life. That wasn’t going to be a good look when you stopped going to hardcore shows and wanted to try and become an accountant.

Fortunately now there is a solution for it when you get bored of it as demonstrated by this guy called Kurt Barnett from Ontario, Canada, who was bored of his humongous holes in his ears by the time he was 25. Solid seven year investment there. The answer is of course plastic surgery and it would only cost him a cool £850, which I suppose isn’t THAT bad really. Although he probably spent about that much getting it stretched in the first place. Still, I expected it to be a lot more expensive.

Money isn’t the only problem though as you also have to go through this horrific looking surgery where they cut out some of your ear and then sew the remaining parts back together, leaving a humongous scar. So glad all I had to to do was take my piercing out when I decided it was time to grow up. Kinda gutted about the growing up part though.

Anyway this is pretty rank so don’t watch it if you’ve just eaten.  The standout part of the video for me has to be where Kurt says it’s going to be nice looking in the mirror and seeing a normal ear lobe from now. Sorry to break it to you dude, but that’s not a normal ear lobe.

Apparently this kind of procedure is becoming more and more popular amongst people in their mid to late 20s because the ear lobe stretching scene was at its peak about five to ten years ago and nobody really does it anymore and the people who had their ears stretched deeply regret it as they try to enter the workforce. No shit. It’s kinda like these massively unlikely trends that somehow got huge for a bit but then returned to being absolute dogs hit a year or so later.