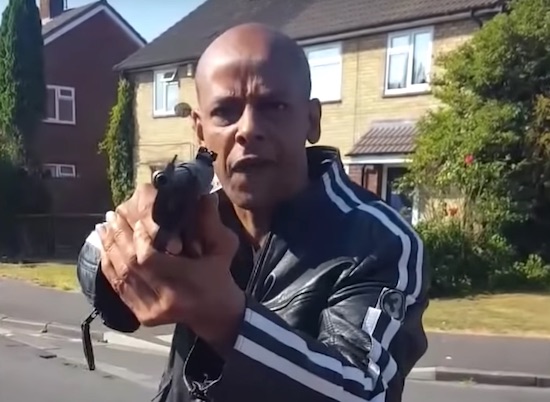 If someone is threatening you with an air pistol in the street – or even a gun – whilst you’re filming them, then chances are you probably think they’re not actually going to fire it at you. Trouble is, you’re not always going to be right though are you?

Case in point is the video below. There seems to be some kind of beef going on with the guy filming the video claiming that the guy he’s filming has smashed up his car for some reason. Only the guy who’s being accused isn’t taking it too well and has decided to arm himself with an air pistol and threaten to shoot the guy in the face if he doesn’t stop filming him and walk off.

You can guess what happens next:

Ouch. I mean I suppose you’ve gotta think that the guy filming is being a bit of a dick because the other guy told him what he was gonna do if he kept filming and I’m also unsure as to what he thought that he was going to achieve if he kept filming him and shouting at him as well. Did he think he was just gonna admit it and not get shot in the face?

Hard to sympathise with his motivations for pursuing such a pointless course of action really. Hope he’s OK though and if that guy did trash his car then he gets sorted out for that. As well as obviously shooting him in the face which is definitely not cool too.

For more of the same, check out this cocky gun instructor trying to act cool after accidentally firing his weapon. Idiot.