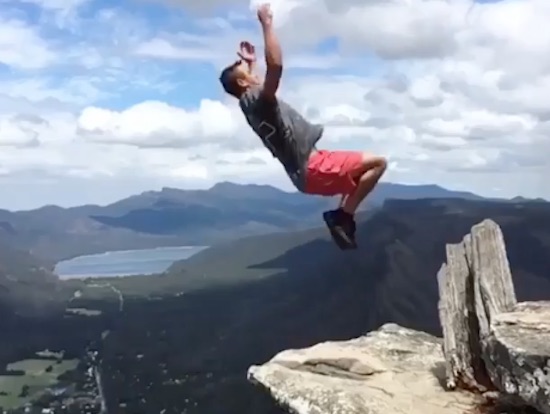 If there’s one thing that I’m shit scared of that you won’t get me going anywhere near then it’s the edge of a really massive cliff – I legitimately get that thing where I really want to jump off and it takes almost every fibre of my being to hold me back and not throw myself off the edge.

That’s why I find stuff like the video below all the more impressive and terrifying. I’ve got no idea who the dude is, but he just casually rocks up to the edge of a cliff and then performs a standing backflip on the edge of it like it’s absolutely nothing. As you do:

Whoa. I thought it might be a trick and it was just one of those shots that was set up to look like it was really high up but no, it’s actually real as that last panning shot displays. Mad respect for the dude.

For more of the same, check out these two teenagers who tried to do the same with a selfie. It didn’t end up so well for them.