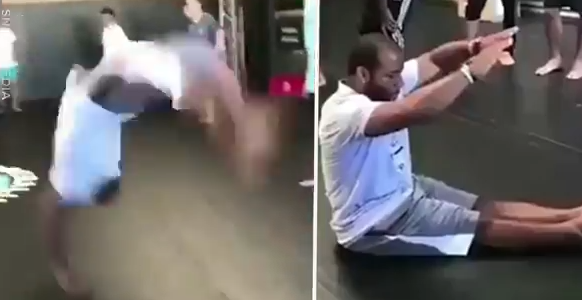 I imagine most people reading this will be like me and won’t even have attempted to perform a backflip in their sorry little lives, so I assume that you’re going to be just as impressed with what this dude Dominique Lewis can do as I am.

I’ve got no idea who this dude is but I’m assuming he’s some kind of world class gymnast or something judging by the evidence seen in this video. He somehow manages to do a series of four or five backflips from a sitting position, then transitions into doing five more in a standing position then does an extra high one at the end just to show off.

I mean yeah you can’t really argue with something like that can you? I didn’t even think that was possible before I read the headline and watched it. Hopefully Dominique kills it at the Olympics or becomes a stuntman or something because it would be a bit of a shame for all that talent to go to waste. I mean he might even have done that for all I know, just hoping he goes on to do much much more than a viral video.

For more of the same, check out this story about a woman trying to be a gymnast but ending up stuck between a window. It’s a doozy.