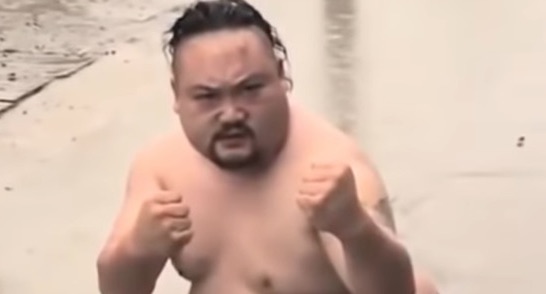 OK, so be honest, if you saw the guy above you looking to fight you in the street, you would probably be kinda scared because he’s so fat and looks mean, but I doubt you would expect him to be able to do half the stuff you can see him do in the video below.

Turns out that the guy is a regular E. Honda and can actually move pretty well for a guy with a gigantic belly. The highlight reel below sees him flipping around and doing a bunch of karate poses and actually looking somewhat elegant, especially when you consider the imposition his weight puts on him for this kind of activity.

OK so it’s hardly Olympic athlete standard but it’s way better than I could do and probably most of you reading this as well. Fair play to the guy – he’s kind of an inspiration.

For more of the same, check out this video of a man getting a rat pulled out of his belly button. What?