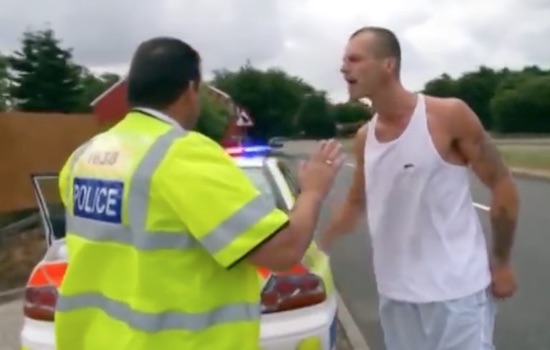 Getting pulled over by the cops or arrested is one of the worst experiences you can have – even if you’re innocent – and so most people know that it’s best to co-operate with the police rather than antagonise them.

When I say most people however, that doesn’t translate into everyone. The guy in the video below has got to be one of the angriest men in the country, which he proves after getting pulled over by the police for dangerous driving and beeping his horn unnecessarily.

In fact, I think he’s damn lucky that they were filming for a TV show called ‘Idiot UK Drivers Exposed’ (lol) because I think if they hadn’t then he probably would have been roughed up a bit or at least arrested. His aggression is completely out of line and unprovoked:

Whoa. Kinda makes me think he might be on the blow the way he’s just ranting and raving, but maybe (even more scarily) he’s actually just like that and this is a regular day for him. Guy’s got issues, however much he wants to deny them.

For more road rage, check out this incident turning into a brutal stick fight. Ouch.