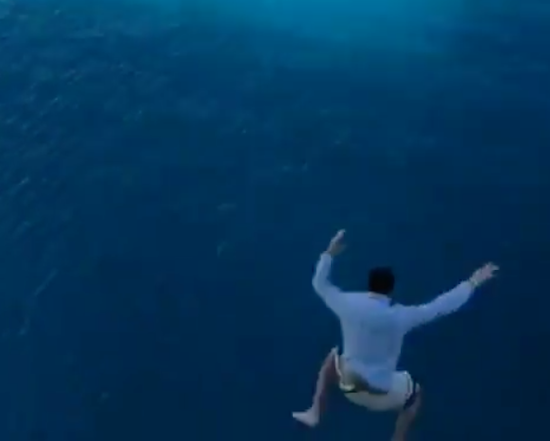 I’m scared of heights, so there’s absolutely no way that you would ever catch me attempting to jump off the top of a cruise ship sailing around the Bahamas, but I’ve gotta admit that there’s something pretty damn cool about seeing someone else do it.

Nick Naydev was a 21 year old from Vancouver, Washington who was on a cruise around the Bahamas when he woke up still drunk and decided it would be pretty funny if he just straight up jumped off from his 11th storey room into the water below. And to be honest it was pretty cool, but as you’ll see if you watch the content below, Nick is pretty goddamn lucky to be alive because there were a whole bunch of things that could have gone wrong when doing something as reckless as this.

Here’s the original video, a news report about the incident and an explanation video from Nick Naydev himself about why he decided to do it:

Well yeah, that extra bit about the sharks really is pretty terrifying isn’t it? Imagine if he had broken his leg upon impact and then just been wolfed down by sharks. Doesn’t really bear thinking about does it?

Also you gotta feel a bit sorry for Nayved that the Hilton hotel in the Bahamas was so crappy – must be real tough getting kicked off a cruise ship and then immediately checking into a hotel afterwards hey? Gotta feel for him.

Not sure what other content is going to be coming from his new YouTube channel but I don’t think I’m gonna be subscribing based on this – sorry about that bud. Don’t do anything stupid like this again though to try and get more followers though hey!

For more cruise ships, check out this story about the rise of STDs on cruise ships. Be careful.