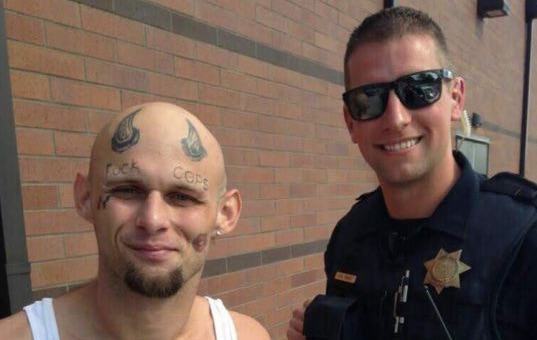 A tattoo isn’t for life it seems.

If you’re gonna get something tattooed on you then you had better hope that you still agree with its sentiments because otherwise you’re gonna end up looking very stupid in the future when you’re doing something that your body art clearly does not support.

The only time you might not – and you still do kinda, but in a good way – is if you end up in a situation like this guy, who for some reason got ‘F*ck Cops’ tattooed on his forehead and then decided that he actually liked them and decided to pose for one. Don’t really understand the context from the post, but maybe have a look at it and see what you can make from it:

Yeah so it seems like Officer Travis busted some guy who was carrying around a bottle of fake urine and this other dude was just hanging out at the scene and decided to pose for a picture with him to make this social media post funnier.

But I mean does it need to be any funnier considering the already ridiculous subject matter? If their social media team knew anything they probably should have saved that photo for another post. Double the likes/reach, you know? Just saying.

Anyway, that guy seems to be a reformed gang member who can’t pay for his tattoo removal or something. Maybe someone over in Tulsa should set up a crowdfunded to try and help him remove them? You know that would be a nice gesture and help him get back on his feet. Just an idea.

For more of the same, check out the real story behind the infamous NWA track. Different.