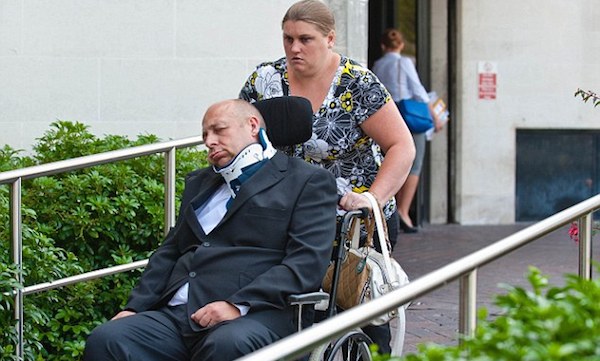 Now he’s about to go back to court to get double fucked.

In what can only be described as the one of the greatest long cons of all time – even greater than the guy who faked heart attacks for five years to get out of paying a restaurant bill – a 47 year old Welsh man named Alan Knight pretended to be a quadriplegic in a coma for two years to avoid a court summons. And he almost got away with it.

Alan started the long con when he stole £50,000 from an elderly neighbour’s bank account. When the cops cracked onto them, he kept avoiding court summons by claiming that he had snapped his neck in a garage accident which meant that he checked himself into hospital when he was summoned to court in September 2012 and July 2013. His 33 year old wife played along with the ruse, taking photographs of herself caring for her husband in a neck brace and hooked up to oxygen in pretty despicable behaviour. 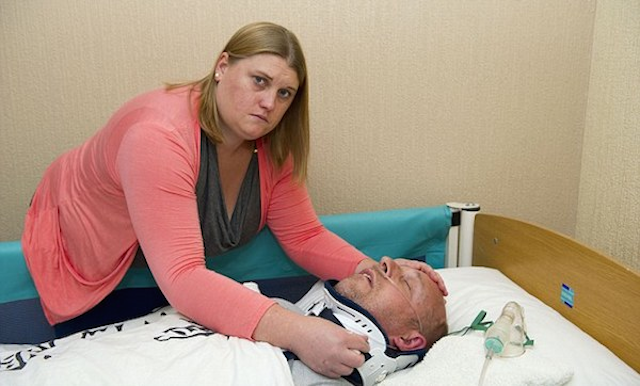 Alan was found out by the cops when they tracked his supermarket card and found CCTV footage of him walking around buying food and driving cars. Doctors at the hospital he checked himself into also confirmed that they thought it was strange that they had seen him eating, wiping his face and writing – all of which really begs the question of how the hell this was allowed to go on for two years? Surely someone somewhere along the line must have realised that this guy had been faking it for some reason??! Or is it just that everyone in Swansea is completely dumb? Possibly.

Knight has eventually been brought to justice though although it’s estimated that he cost the court system, NHS, and police several thousands of pounds. He was found guilty of 19 offences including forgery, theft and fraud on Tuesday and will be sentenced next month. If possible it would be great to send him to one of these sadistic Chinese prisons because he really deserves the worst that he can get, what a douchebag.