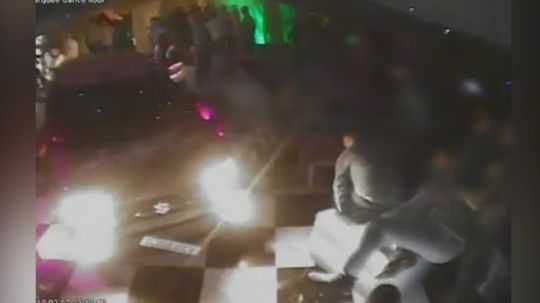 It completely sucks when you get thrown out of a nightclub – especially when they tell you you’re too wasted to be there when you clearly aren’t – but there’s not a lot you can do about it except complain all the way home about it and go to bed.

Unless your name is Mohammed Abdul that is. Abdul got thrown out of Blake’s nightclub in Gravesend, Kent on March 17th of this year and decided he wanted to exact some revenge on them for this.

He was clearly completely and utterly off his face as he had apparently drunk 15 glasses of vodka and tequila and smoked about five spliffs and that’s probably why he thought it would be a good idea to get behind the wheel of his car and drive it through a marquee that was attached to the club that had a whole bunch of people dancing in it. That’s really gonna mess up your night out:

Geez that’s like something out of a movie isn’t it? Can’t even imagine a car suddenly bursting into me when I’m throwing some shapes on the dance floor.

Fortunately nobody died and only eight people were injured, but Abdul is now on trial for attempted murder. He’s denied those charges but admits causing serious injury via dangerous driving. The jury is currently deliberating on their verdict and Iv’e really got no idea what they’re going to come back with. Either way, driving into a club full of people in your car is a pretty asshole thing to do so I hope that Abdul gets a punishment fitting the crime.