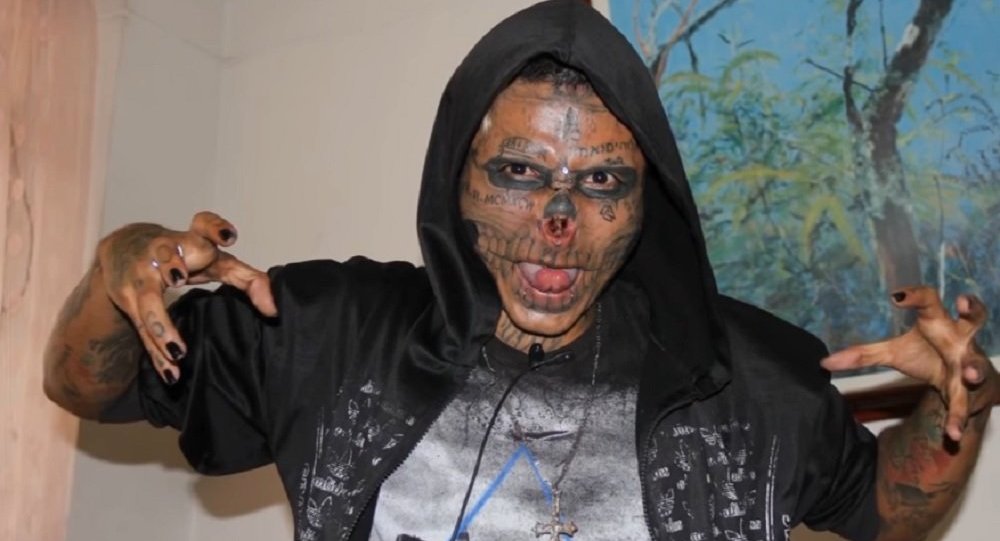 Body modification has come on leaps and bounds in the past couple of decades, but I don’t think I’m ever not going to think it’s weird when I encounter someone like the dude in this article.

His name was Eric Yeiner Hincapie Ramirez but he now goes by the name of Kalaca Skull after undergoing two years of extreme surgery to make his head resemble more of a skull. The 22 year old has always loved skulls but only started turning himself into one after his mother died because she didn’t approve of his plan. Pretty good idea there – just wait until someone who doesn’t want you to do something is dead, then you can get away with it scott free. Real smart.

In order to begin his transformation, Skull had to have the lower half of his nose removed as well as his ear lobes. His tongue was then split in half and tattooed so it was a blue grey colour and then he got large black eye sockets tattooed around his eyes. Looks pretty good right?

Unfortunately, in his native Colombia Skull hasn’t’ been having the best of times with his new look. People are often critical as he’s the first person in the country to have this type of voluntary mutilation performed on him. This hasn’t deterred him though, with Skull recently saying the following :

Body modifications are a personal decision and should not be judged

It is like judging a woman for getting breast or buttock implants. For me, a skull is like my sister, a part of my family really, I feel very attached to them.

My surgeries are a ‘dream come true and I plan to complete my transformation into a ‘living skull’.

I am a normal person who just happens to look a lot different than most other people. It’s like a different way of thinking, of dressing, a different style of music. I just feel good the way I am.

I mean that’s great that he feels good in his body and loves it, even if it is completely weird to most people. Just gotta let the guy be happy I guess. That’s just the way it is.

For more of the same, remember those Bagel Head dudes? That was a weird point in history.