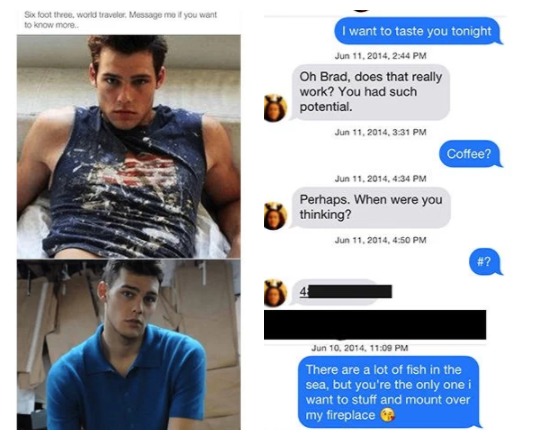 He can say literally whatever he wants and still get their digits.

Girls are always complaining on Tinder that guys just come out and say completely gross and offensive things to them all the time. Whilst I can sympathise with that because it can be a bit uncouth, when I see stuff like the story below I’ve got absolutely no respect for them at all because it turns out a lot of them are just as shallow as the guys they find offensive.

A guy called ‘GermanTraveler’ (not his real name) was so sick of not getting any matches on the dating app (need to up your game pal) that he decided to go onto ‘easy mode’, by uploading pictures of a male model onto his profile instead and saying that he was a ‘world traveler’ on his profile. He chose the guy from the ‘Call Me Maybe’ video and then decided to open with the filthiest line he could think of after he had matched with the girls.

Can you guess what happened? Oh yeah, apparently every single girl he swiped right on matched with him too:

I’m sure this isn’t indicative of every single girl on Tinder ever (and he was probably lying when he said every girl matched him and gave him their number), but it certainly seems like there are a fair few that absolutely love it. And even if they don’t, all the guy needed to do was ask them out for coffee first and they all accepted, despite the fact he had said those filthy things as his opener. Girls huh? Never gonna understand them.

For more Tinder, check out our regular Tinder nightmares section. This guy’s lines are pale in comparison to some of the ones in there.