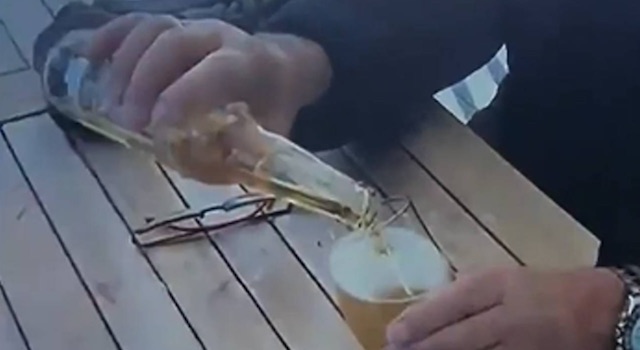 It’s been a couple of days since we’ve been allowed back at the pub and it seems like the vast majority of the population has been taking advantage of this and heading out to enjoy that draught beer taste that you just can’t replicate at home.

All of us that is except for one guy who somehow also managed to make his way onto the BBC’s featured coverage of everyone heading back to the pub garden on Monday, only to have the worst possible take on the situation. This guy had waited four months to get back to the pub for a draught beer and was one of the first people in there when they opened their doors, but bizarrely chose to instead buy himself a bottle of Corona and pour it into a half pint glass before declaring ‘Ahhh that’s beautiful. Well worth the wait.’ What?

Hes probably just buzzing to be back in the pub so fair play to him but surely BBC could have found a punter, y’know, actually having a pint

Needless to say, everyone was rightly baffled by this because the guy could literally have done this at any time during the lockdown at his own house. Maybe there’s something that tastes better about it when he’s sitting at his favourite pub sure, but even so it seems like an absolutely terrible take on the situation and an even dumber one for the BBC feature. Even if you don’t like draught beer as much surely you would have one in this situation? Or better yet if you’re the BBC find one of the thousands of people enjoying one rather than this guy?

Obviously it didn’t take too long for the trolls to come out and you can’t really blame them this time, can you?

@Ruairimccart hopefully this man was arrested on the spot after this

Could have just gone to his fridge and saved the walk

Should be exited from the pub, by force, immediately. It has its time and place but that was not it.

Yeah, gotta say I agree with all of those sentiments because it really is ridiculous that this old guy would do that, unless the whole thing was a massive troll from him and the BBC?

The Corona kinda makes me think that it might have been, but at the same time it still seems like it’s so stupid that nobody could have actually thought it up as a prank and it must have actually been true? I guess we’ll never know – at least we can all agree on how ridiculous it is though. Enjoy your bottled Coronas this week guys!

For more of the same, check out these people that camped outside the pub to get the first pint in because they were so desperate. Hope they weren’t drinking bottles of Corona as well.