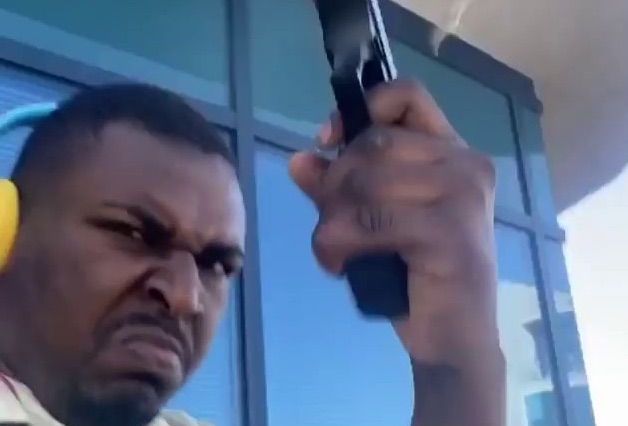 The first guy in lockdown to well and truly crack.

So far we haven’t experienced anyone go insane during lockdown and try and kill anyone, but that all ended this morning when police were called to a balcony in Chatham, Kent after there were several reports of a man firing guns from his balcony.

Several videos have popped up on social media of a man who is apparently known as Flexing Mike – the CEO of Truth or Dare Records – marching around his balcony and shooting off a variety of weapons at the police, including a machine gun, rifle and a pistol. Further footage appears to show the gunman live-streaming himself walking around his apartment and showing off his vast collection of guns and bullets, before he opens fire off his balcony again.

It’s really pretty disturbing (might get taken down from his Instagram later so apologies about that if it happens), although I think it’s been confirmed that none of the guns were actually real, but eve so don’t watch it if you don’t wanna get freaked out:

I HIT THEM UP

Damn. Kinda seems like he’s more fucked off his face on drugs or mentally ill rather than actively trying to shoot and kill people. Not sure if that’s more or less reassuring in the situation though.

Fortunately, the police were called to the scene fairly sharpish and were able to enter the building and arrest the man before anyone was hurt. No details have been released about his identity or what he was doing up there, but the Kent Police Force have issued the following statement:

Kent Police was called at 8.35am to a disturbance at a flat on Dock Head Road, Chatham.

Members of the public reported seeing a man on a balcony with weapons and patrols, including armed officers, attended the scene.

The police helicopter was also deployed and a man in 30s has now been arrested on suspicion of firearms offences.

Patrols remain at the scene where officers have located four suspected imitation firearms as part of their enquiries.

Really weird situation. I guess we should be thankful that nobody was hurt and hope that this isn’t the first in a series of people going way too stir crazy after being locked in doors for so long. Try and stay sane and don’t do this.

For more of the same, check out this Russian guy who shot five people dead for making too much noise during isolation. Don’t do that either.