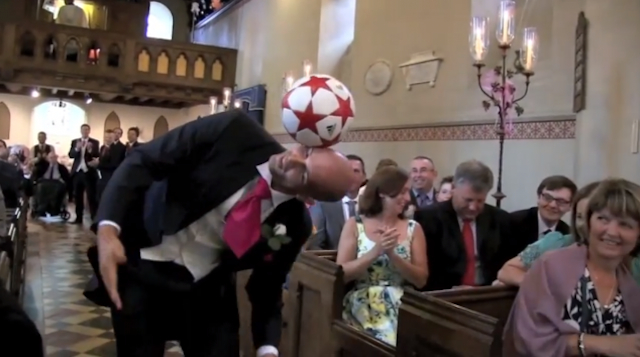 What’s the best way to get over those wedding nerves when you’re waiting for your bride to be to arrive? Apparently to grab a football and walk up the aisle doing some completely sick skills.

This looks like my kind of wedding. In order to take his mind off the impending arrival of his wife to be, a dude called Daniel Cutting decided to walk down the aisle with a football doing a bunch of epic freestyle tricks. And when I say epic I definitely do mean epic because some of these skills are completely out of this world. It would be impressive if he was doing them at any point in his life, let alone 15 minutes before he’s due to get married.

I’m not sure if this is some kind of viral stunt or just a guy having fun as there doesn’t seem to be any information about it other than the blurb that accompanies the video: ‘I got married on the 24th August, 2013 and decided to do some football skills down the aisle to entertain the guests before my wife-to-be arrived!’ but judging by the nervousness and stuttering in his little interview before he kicks it off it seems as though it’s real. Although that could all be part of the plan.