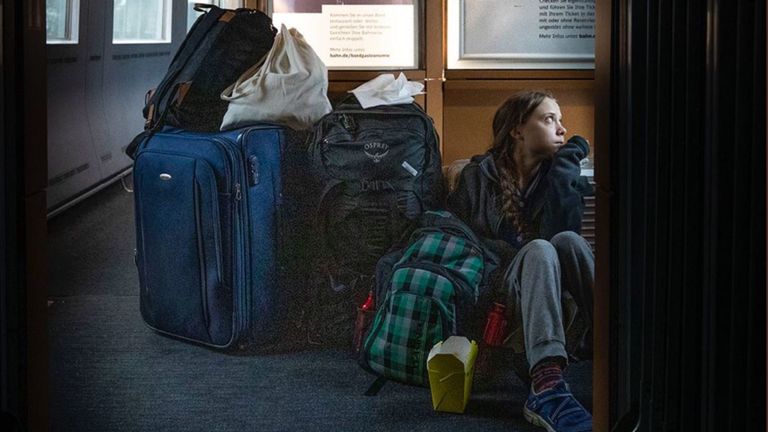 16-year-old climate change activist Greta Thunberg became a household name in 2019 after calling out world leaders for ‘doing nothing’ to help climate change and generally pointing out every fault in society since then.

She landed herself in a bit of bother this weekend though after Tweeting the following on her way home from the UN Climate Conference in Madrid:

Traveling on overcrowded trains through Germany. And I’m finally on my way home! pic.twitter.com/ssfLCPsR8o

Dear #Greta, thank you for supporting our railway in the fight against climate change! We are happy that you travelled with us in the ICE 174. And that with 100 percent eco electricity. It would have been even better if you had also mentioned how friendly and competent the team looked after you in your seat in First Class.

Following a backlash on Twitter, Greta Tweeted to make clear that she had only been on the floor for part of her journey, and that overcrowded trains were in fact a “great sign because that means that the demand for train travel is high!”

Deutsche Bahn also received some stick for disclosing that Greta had been travelling with them in first class, although I don’t see why they shouldn’t defend themselves after she suggested that she had to travel while sat on the floor.

You might remember that this stunt has been tried once before – by Jeremy Corbyn about three years back. He claimed he was travelling on an overcrowded train and had no choice but to sit on the floor, making a political point about overcrowding and underfunding as an argument as to why we should nationalise British railways.

It later turned out things weren’t quite as he was making out:

So yeah, despite the good intentions of Greta Thunberg and the work she’s done raising awareness of climate change, it just goes to show that bending the truth even a little bit will always come back and bite you in the butt in today’s climate. If things are really so bad, then there’s no need to exaggerate, right?

Meanwhile, the outrage of Greta Thunberg winning TIME’s Person of the Year has been completely out of control. I guess they’ll be even more outraged after they read this story.