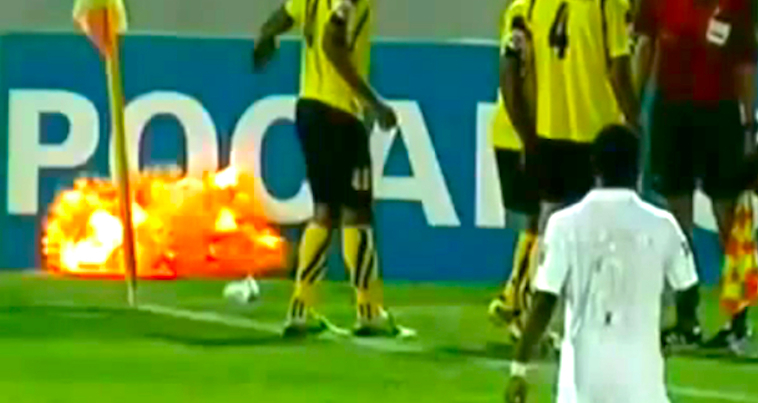 Action on a football pitch has often been described as explosive but the phrase took on a whole new meaning in the Asian champions league over the weekend.

Ok so this happened towards the back end of the week but I completely missed it even though I’m normally pretty clued up on football news so I figured I would write about it today because it’s completely outrageous and other people might have missed it too if I did. I guess over the weekend I was just too busy crying about Bille Joe having a meltdown and Birmingham getting dicked 5-0 at home to Barnsley so I couldn’t really concentrate on anything else that was happening.

But this is just too crazy to ignore. I’ve heard of crazy footballing rivalries before but I’ve never heard of anyone throwing a grenade onto the pitch during a match and it blowing up. The stage was the Asian Champions League and it was a quarter final match between Sepahan from Iran and Al Ahli from Saudi Arabia, which I guess there must be some kind of huge rivalry between if someone threw a fvcking grenade onto the pitch right? Or maybe it just has something to do with that stupid Muhammad movie that everyone is going crazy about over there. If you know specifically why this happened hit us up – info@sickchirpse.com.

The video kinda speaks for itself but the player – Sepahan midfielder Adel Kolahkaj – who picks up the grenade must feel pretty lucky today. I guess he didn’t realise it was a grenade – or that it was active – judging by the fact he picked it up and nonchalantly throws it off the pitch just before it explodes! A couple of seconds later and that guy would have been toast. Amazingly, even after this explosion – which fortunately nobody was hurt in – the game managed to continue. It ended up 0-0 which suggests that this was probably the most exciting incident in the game.