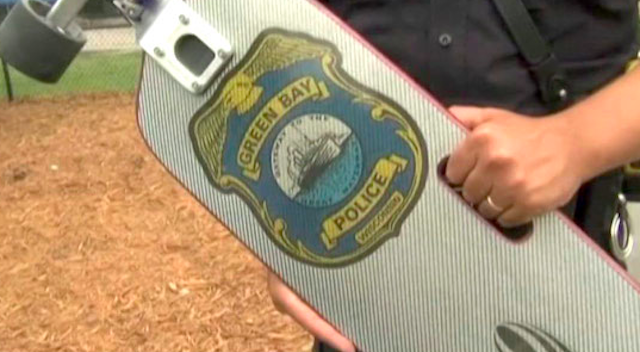 Watch out Bart Simpson, Tony Hawk and Bob Burnquist, there’s a new skateboarder in town. Only this time he won’t be popping tricks on public property and getting shouted at by the police – because he IS the police.

Officer Zwicky is the lone member of the Green Bay police station’s skateboard patrol unit and has made a big impact on the local community, earning celebrity and superhero status there. Zwicky explains:

‘When I am out on the trails patrolling people, I get a lot of selfies with people and things like that. It gets us more exercise, and it also helps us talk to people because the squad car is kind of a barrier for us.’

His board is kind of dorky though – it’s specially designed to be wider for some reason and also has bigger trucks, wheels and red and blue flossing LED lights like a police car, none of which are particularly cool at all. Officer Zwicky is a bit of a dork too though – check him out popping exactly zero tricks at the skate park in the video – so I guess it all kind of works out.

If they want the skateboarding idea to take off though they really need to work on their image though.