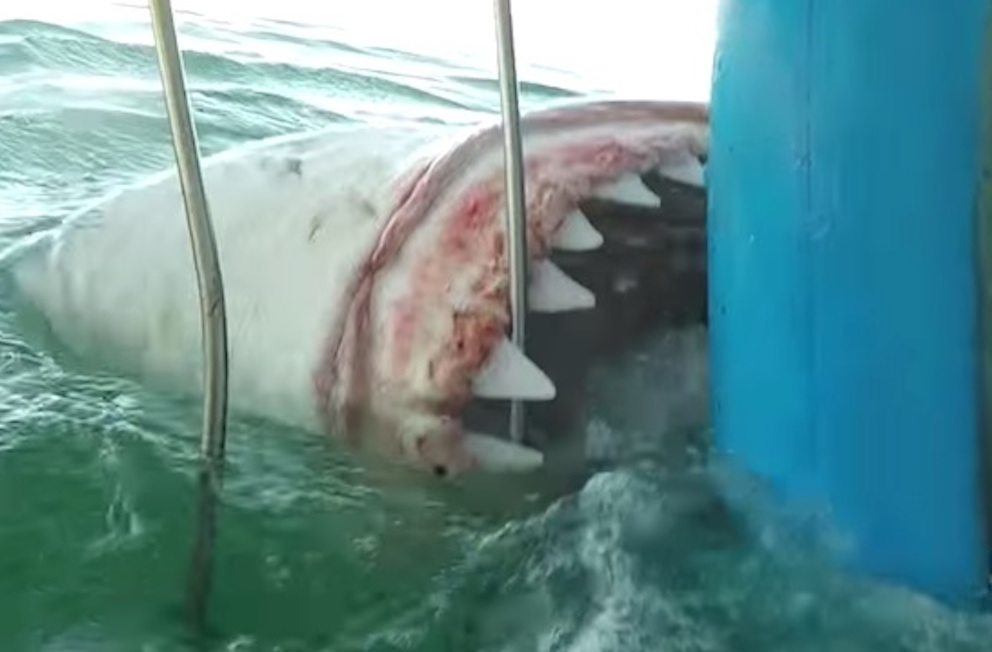 It’s a big attraction now to go scuba diving inside a massive cage whilst sharks and other terrifying creatures from the deep swim around you looking at you and pretty much scaring the absolute crap out of you. To be honest it looks like a lot of fun.

That is unless a great white shark tries to get in on the action with an unrelenting attack on you, constantly banging into the bars of the cage and gnawing the protective barriers and buoys to shreds. Then, you probably would be absolutely bricking it instead of having fun.

This is exactly what happened to Hillary Rae who was cage diving a couple of days ago when a humongous great white shark came and joined her party.

While shark cage diving, our cage was attacked by an 11.5 foot Great White shark. The round buoy attached to the side of the cage was bent in half. Some of the lining of the outside blue barrier bar was bitten through as well. It was quite the up close and personal experience!

This was a trip I went on during one of my days off from volunteering at Cango Wildlife Ranch. The video was shot with a GoPro Hero 4 wide angle. The shark was even closer than he appears. I apologize for the shakiness.

She doesn’t exactly sound that bothered does she? If it was me I would be absolutely bricking it at the time and probably traumatised about it for weeks afterwards, if not the rest of my life.

I guess some people are just born braver though – I’m sure if she had to fight off a shark in a super intense encounter like this diver she wouldn’t be posting the video on YouTube like it’s just another day at the office, would she?