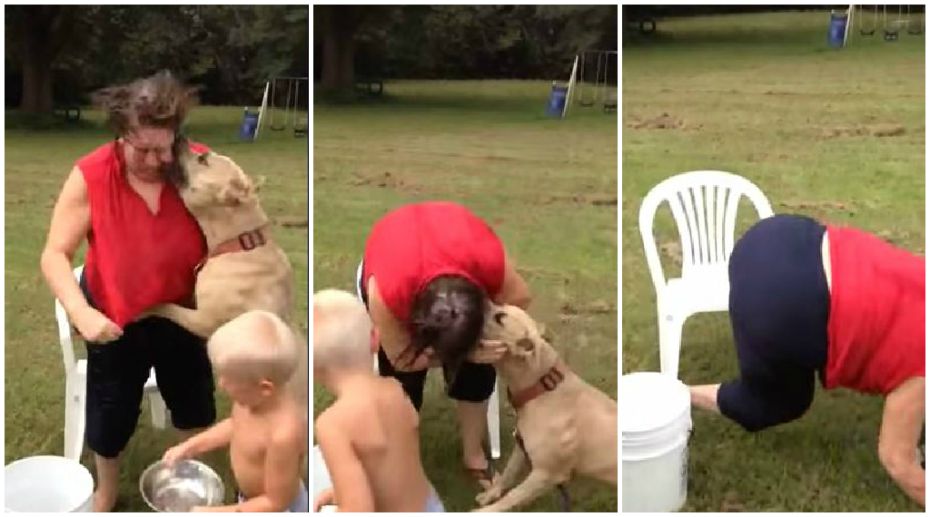 This is probably the most horrifically messed up ice bucket challenge ever.

It’s been a while since we’ve heard of anyone doing an ice bucket challenge – it seems like they died out around October after we saw people like Jose Mourinho and Vince McMahon take part – but even after featuring so many disastrous efforts at it here on the site it looks like we might have finally found one that topped them all.

It’s the turn of someone’s grandma to do the ice bucket challenge – which she completes successfully, albeit fairly grumpily – when a pit bull comes out of nowhere and savagely mauls her, first biting her ear and then pulling her to the ground and well and truly doing a number on her face. It’s actually pretty horrific so if you’re squeamish don’t watch the video.

Here’s what the uploader had to say about the video and the immediate aftermath:

This is my mom when she was viciously attacked by a pit bull last year during the ALS ice bucket challenge. She lived to tell the tale of it and didnt want this released until she was ready.. This should serve as a warning to all pet owners. Unless you are going to take the time to make an animal a pet then it will remain an animal. This was my sister’s dog who she only kept to stud out for breeding purposes. she took no time to train him or make him listen. He was a wild dog and she should be ashamed for keeping him out of selfishness and not love.

As for the dog in the video yes he was held for a mandatory 10 day holding period to ensure he didnt show any signs of rabies. My sister did not want to release the animal to be euthanized even though he almost killed our mother. The only reason the dog was at my moms was because my sister got kicked out of where she was living and had no place to put the dog. The 3 children that you saw in the video are my sister’s kids. my parents are raising them because my sister is just not a good person when it comes to taking care of anyone/anything but herself. so when she was asked did she want to surrender Kilo she had to think about it. After speaking with animal control they informed us that because she left the dog there for more than 30 days that he was considered my parents’ dog and that she had abandoned him. My dad went there the next day and signed the papers to have him euthanized.

This dog had not been kept around the children and the entire time he was around he had to be kept away from them because he kept knocking them down every time they would try to run by. Even I went there and tried to teach him basic commands “sit, stay, no, and to not jump.” The dog was unwilling to learn and continued to exhibit dominant behaviors. I begged my mom to get rid of him and she was terrified that someone else like my sister would get ahold of him and continue to breed him or use him for dog fights. My mom was determined to make him a part of the family and was holding out hope that he would adjust to our family. Even my dad wanted to get rid of him and told my sister several times to come get her dog, but she did not. It came to a point that I stopped going down there because I did not like the dog especially being around my daughter.

Even though Kilo was dumb and stubborn even I did not see this coming. He had no warning signes or indication of being nuerotic or anxious around people. He did not growl snarl or show any signs of aggression. He just turned for no apparent reason. Even though he almost killed my mom, she still was very upset at the situation.

My least favorite part about this story was talking to the people at animal control to find out that my irresponsible sister had previously been to the emergency room for dog bites with this dog and then still brought him to the home where her children and our parents were I completely blame my sister for this. Unfortunately we cannot pick or choose who we are related to, but I can tell you that i do not consider her family to me. This is just one incident on a long line of past and present screw ups she has dragged us through.

Lengthy. Check out the video below and see if you agree with the response. Even though we’ve given props to pit bulls in the past, I think this is a step too far and the dog probably deserved its punishment.