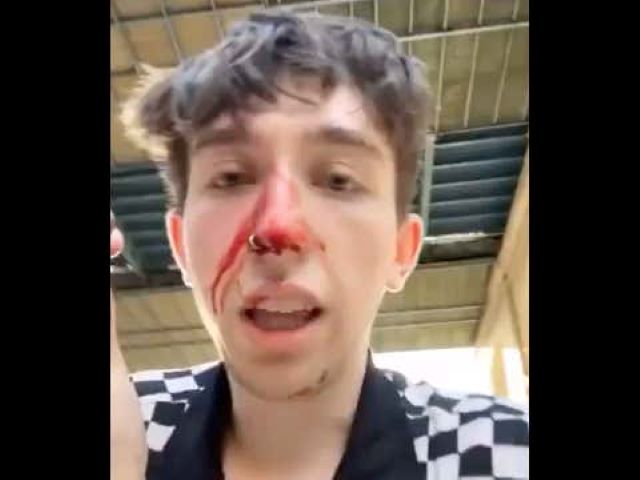 I don’t know much about the graffiti scene, but one rule that seems pretty fair is that you shouldn’t graffiti over someone else’s work, especially if that someone else is a deceased graffiti legend.

Well this little twerp over in New York managed to accidentally graffiti over a section of artwork by iconic graffiti artist Zexor, and ended up receiving a beatdown for his troubles:

As you can see, he ended up riding in the back of a cop car trying to identify the people who beat him (another big no-no in the graffiti scene). Despite seeming quite keen to finger his assailant, he then caught a load of backlash and took to Instagram to explain his side of the story:

The text in full:

Ima clear some things up real quick cause my Ig stories werent the full story. Firstly I DID NOT CALL THE COPS. I wanna make that real clear, fuck 12, fuck the ops, n fuck anyone who looks like em.

I was walking around LES and saw a empty spot on the bridge so I went for it. When I was painting I clipped the tag under me about a few inches deep by mistake.

Out of nowhere I got sucker punched by some dick and I dipped without my paint. I took a sec, thinking he just didn’t like my shit (I don’t do text) and asked peacefully to get it back. We threw hands and we beefed it out like men.

After, I was walking away (bloody) and a dude came up to me and asked what happened. I told him I got jumped but I was all g, just gonna go home but he was already calling the ambulance (AGAIN NOT THE OPS). I guess he had said it was a mugging or some shit cause the ops showed too. I had paint on my hands and a fresh piece, they knew what went down. They told me if I got in the back they’d let me go. I’m not trying to catch a case. I’d NEVER point him out. I was angry, but even when I saw him, I didn’t peep.

Well because I didn’t give em anybody they decided to arrest me and I spent the night in jail. I took the L but it was the right move. I didn’t find out till after that the piece I clipped was Zexor.

As far as it goes in regards to tagging over Zexor, if I had known who it was, I wouldn’t have done it. The man is a hero to me, and my b I didn’t recognize the piece in the rush I was in to get my tag up. I’m laughing at yall telling me I don’t know graff culture when the mans literally had docs of himself talking about taggin over ppls shit with his face exposed. I looked up to him. I took notes.

I’m fucking from New York. Born and raised. The paint from my cans aint ever gonna wash off these hands. Yall don’t like my work? Good. Yall call me a Rat? Good. Yall make me famous? Even better. You wanna get tight at me cause I’m trying some new shit that’s chill, be basic. I love this city but I stand by what I said, this shits toxic. Yall out here talking about raping my moms n killing me? Nah. Not my New York.

Cringe central. Fair play to the kid for pursuing his dream of becoming some kind of big-time graffiti artist, but he’s just so ill-prepared for it it’s unreal, and even someone like me with no idea about the world of graffiti can see that. Not only has he inadvertently tagged over a respected graffiti icon’s artwork, he then films himself riding around with the police and acting like a tough guy, despite then claiming he hates the police.

One point he does make is that this Zexor guy used to graffiti over other people’s shit all the time, but I guess that’s something you can do when you’ve established yourself as one of the top graffiti artists in the game. No one even knows who this Bozo geezer is! Well, they do now I suppose but not for the reason he would have liked.

Here’s the sort of comments he was receiving before he shut off the replies to his post:

Not good. Can’t imagine a young Banksy pissing off the entire graffiti scene and coming back from it, so good luck to this lad. He’s gonna need it.

For the young millionaire who parked a gold supercar in the streets of London and instantly had ‘Wanker’ spray painted on it, click HERE.