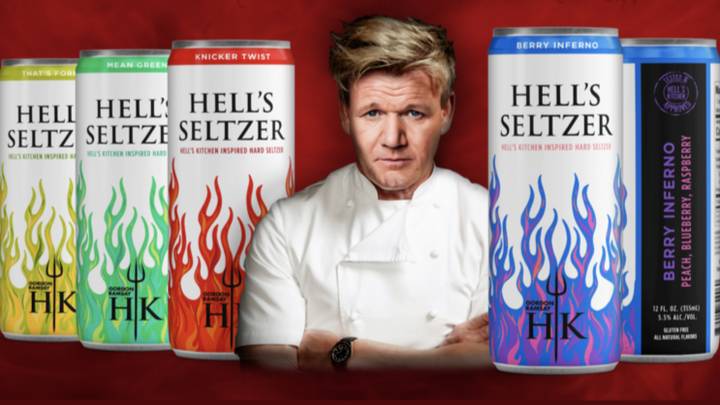 This is so stupid.

One of the biggest phenomenons over the past couple of years has been the introduction of hard seltzers/waters etc which literally means that you can sit around drinking water and getting hammered at the same time and for some reason Gordon Ramsay has seen this as a good business venture and decided to get involved. I suppose you might as well when you’ve got as much money as him.

The seltzers are available in four flavours and will be coming to stores in early 2021. They’re gluten free (yes!), have an 5.5% ABV and will cost around £12 for a multipack of 12 which is pretty good value to be fair. Anyway, here’s what Ramsay had to say about his new venture, which he has produced closely with Brew Pipeline and Global Brews of London:

Yes, even I enjoy a hard seltzer after a long day, so I decided to toss the devil horns into the ring and heat things up!

Hell’s Kitchen will never freeze over, but a cold Hell’s Seltzer is a great start.

I really can’t imagine him sitting down with a hard seltzer at the end of the day but whatever. Hell’s Seltzer is at least an on brand name for these alcoholic waters. The actual flavour names are even stupider though because why not? Start as you mean to go on, right?

When you’re coming to buy them, you’ll be able to choose from the following:

Yeah, really sounds like they pushed out the boat with these names in the creative meeting to come up with them doesn’t it? Kinda surprised Ramsay has let them come out with them because I could just imagine him getting his knickers in a twist and going absolutely mental at the team for coming up with such lame and uninspired names, but maybe I’m just reading him wrong and these are actually the lame kind of ideas that he would back. To be honest he’s probably so busy he probably doesn’t even know someone has developed these alcoholic seltzers for him.

The good news though is that if you’re into Gordon Ramsay and alcoholic water and a bunch of flavours banged together and given a stupid name then you’re gonna in absolute heaven at this announcement. Unfortunately absolutely none of those things I’ve just described appeal to me in the slightest so I’m out, but I imagine there must be at least a few people out there who are going to be buzzing off this. Merry Christmas guys.

For more of the same, check out Gordon Ramsay selling an £80 burger at his new restaurant in Harrods. Guy clearly doesn’t have a clue what he’s doing.