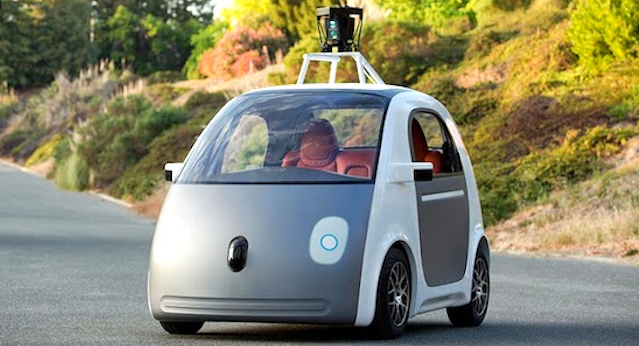 Google continues to push technology to the limit by revealing they’ve invented a self driving car.

First came Google Glass – which is definitely an invention that has been received positively by everyone in the world (not) – and now Google have revealed that they’ve actually managed to develop a self driving car, which was something I never dreamed would even be possible whilst I was still alive when I was watching The Jetsons in my diapers.

Ages and ages ago you might have seen a video of Google trying out their ‘self driving technology’ on a Toyota Prius and Lexus Hybrid and if you didn’t then hey, check it out below (although I can only find the Toyota video), but things have developed since then as they’ve now integrated the technology into their own prototype designs. Find out what I mean below the video.

â˜› More Cars: 6 Of The Weirdest Concept Cars Ever

Basically, the concept behind Google’s new self driving cars are that they’re 100% self driving and as such the driver won’t even need to touch it at all whilst they’re inside the vehicle. As such, there’s no steering wheel, no accelerator, no brakes, no glove boxes, no mirrors and no stereo systems. Instead, it offers a compact look, a drivetrain that maxes out at 25 mph, a GPS that can tell you where you are and a button to start and stop your journey. You get in the car by ordering it on a smartphone and plugging in your location and destination.

OK, let me be the first to say exactly what you’re all thinking – it looks complete and utter dogshit. Although admittedly it might be cool sometimes to get driven around without having to think about it yourself, you can do this anyway and it’s called a taxi. Or a girlfriend if you’re lucky. Or parents if you’re really lame/under 18.

This however doesn’t account for how completely and utterly dorky the car looks, how you can’t fit anyone in there, how you can’t go above 25 mph so are probably going to take forever to get fucking anywhere and – the most outrageous sin in my mind – how you don’t have a fucking sound system. I mean everyone knows that even owning a car is about driving around with your homies, blasting the tunes and having a fucking blast, rather than sitting inside some little bubble and going really slowly to where you need to go on your own.

Of course, I realise that the major plus point of the self driving car is that it’s way safer than anything else on the road, mainly because it goes so slowly but also because it’s equipped with ‘highly advanced sensor technology’ that will enable it to avoid collisions. The front of the car is also made of foam with a flexible windshield, so even if it did collide with anything by some freak accident then it would cause minimal damage to the driver. Or should that be passenger? Or rider? I dunno.

Obviously this would drastically reduce the capacity for a harmful car crash in one of these cars by vastly reducing the variable of human error, but it would also make driving a car completely and utterly boring and lifeless and really slow and pretty much the opposite of fun. I don’t think driving is super fun now but it definitely has its moments, and I’m not sure if I want the future to be all safe and boring like this looks it might be leading to. I’ve read and seen enough science fiction to know that that never turns out well, but it looks like that might be the way we’re going.

Google doesn’t have any immediate plans to sell this car, but is testing it with a live passenger this summer, so it’ll probably be mass marketed this time in five years. Here’s hoping it isn’t.