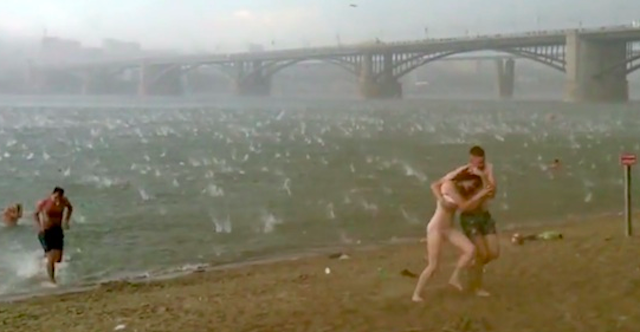 We all know that a lot of freaky and weird stuff goes down in Russia – just check out our From Russia With Love photo series if you don’t believe us – but this might just be the weirdest, and for once it’s got absolutely nothing to do with the Russian people.

This time it’s due to the freaky Russian weather of all things on a beach in some place called Novosibirsk which apparently is in central Russia somewhere. On it, the temperature suddenly dropped from 41 to 22 degrees celsius (how the hell does that happen?) causing a humongous hail storm where the hail stones were as big as golf balls.

That might not sound that scary but judging by the reaction of the people on the beach in this video it was fucking petrifying. Sunbathers shield themselves under parasols, blow up beds and nearby trees as they try to avoid getting hit by the giant stones and probably getting knocked the fuck out.

One reveller described the scene:

‘It was like being hit by raining bullets from the sky. My husband was protecting my young daughter but his back was exposed to the hailstones and he has bruising all over it. He told me: ‘If we die, I love you.”