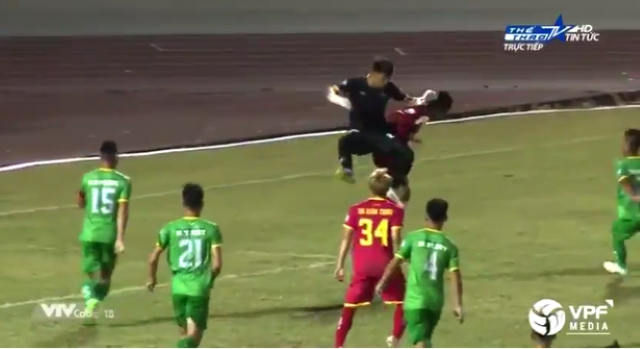 This guy’s got balls.

Every professional footballer in the world dreams of sticking it to the referee anytime they step onto the pitch, and this became an exhilarating reality for one player over in Vietnam the other day.

With the game level at 1-1 and approaching the 90th minute, Can Tho goalkeeper Pham Tran Tranh Vu rushed out to collect a cross, only to clatter into a Cong An Nhan Dan player.

The ref immediately awarded the penalty and carded the keeper, who then got his revenge against both the opposition and the referee with this impressive dose of football shithousery:

Goalkeeper in Vietnam concedes last-minute penalty, saves it and celebrated with a knee slide at the referee 😭 pic.twitter.com/vGXfxhvWsZ

What a rush! Only wish he had smashed into the referee and knocked him over like a bowling ball, but alas. I mean let’s be honest – it was a disappointing knee slide, but then again keepers don’t get too much practice at that. Poor form for sure, but it’s the sentiment that matters, and Pham Tran Tranh Vu essentially pulled out his balls and rubbed them all over the referee’s face.

Although I’m not sure what he’s complaining about to be honest, because that was a pretty clear foul in the box and the penalty was 100% warranted. Lucky not to get a straight red at the end there, although he probably would have felt it was worth it just to celebrate in the ref’s face. Now if only we could see someone do that to Mike Dean in the Premier League one day…

For the massive fight that broke out during a Brazilian football match after a player celebrated by stripping completely naked, click HERE. Fun times.