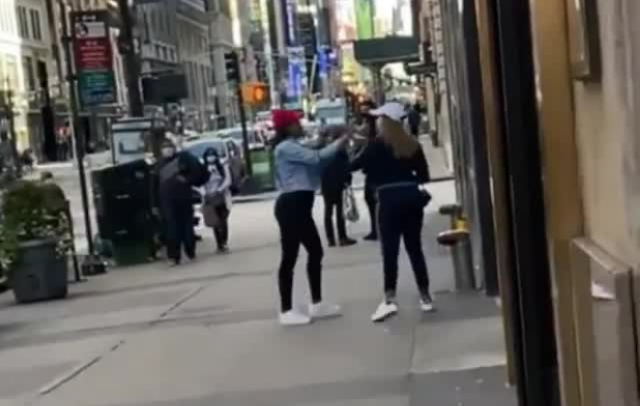 Makes you wonder what’s on that phone.

I cannot in a million years think of any circumstances under which I would attack my mum, much less over something as trivial as confiscating my phone.

Yeah OK we don’t really have any context here aside from what we see in the video, but something tells me this kid is an entitled brat who probably would’ve benefited from a spanking or two while growing up…

Blimey! I think she wants her phone back? I could be wrong though. In fairness to the daughter, she claims at the end of the video that her mum doesn’t pay for the phone, which I guess technically means that her mum is stealing her property. Even still, the audacity to attack your mum in the street over a phone! Are there nudes on there she doesn’t want mum to see? Was she in the middle of constructing a very important text? Just such an OTT reaction to having your phone taken away, and probably an indication that she should’ve had it confiscated a lot sooner.

Anyway, at least mum didn’t fight back or launch her phone into traffic or anything, which I don’t think many of us would’ve blamed her for doing. Maybe they can sort it all out at family counselling or something. Best of luck to mum and daughter!

For the mum and daughter drug dealers who walked free after being found with £1,000 of weed in their BMW, click HERE.