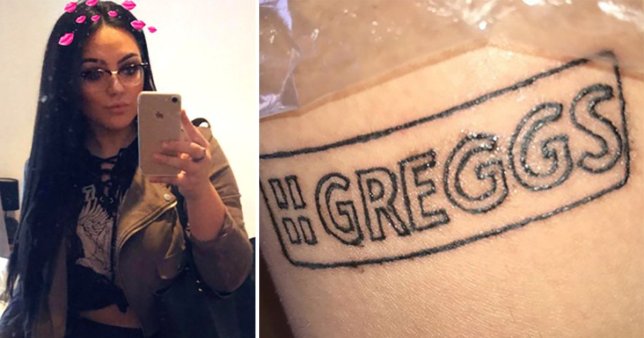 There’s no denying that Greggs definitely has a place in the heart of most citizens of the British Isles, but does this extend to most of us getting a really crappy tattoo of their logo on our legs?

The answer is probably no, but there’s always one crazy idiot out there that thinks doing something like this is great banter and in this instance her name is Nicola Reed. 19 year old Nicola recently went on her first all girls holiday without her parents to Kavos and thought that this awful tattoo would be the best way to commemorate her experience:

@GreggsOfficial what’s a girl gotta do to get a free pasty pic.twitter.com/9SO1woqjaN

Really basic hey? Bet she decided to get that done at 4am after a heavy night drinking shots and snogging boys when it came to her in a flash and she just had to get it done right there and then. At least she still thinks it’s a great idea now though, so I guess that’s something.

Lol I swear I typed all that before I read her recent tweets. She did confirm that it was a dare and her friend paid for it and they were wasted. Kinda similar to my scenario but not quite, I hold my hands up:

I got the tattoo as a dare, I didn’t pay for it my fiend payed for it. I’m on holiday and we wasn’t sober. I shouldn’t have to explain myself to anyone but idk why everyone’s giving me shit for something they don’t need to

I mean yeah fair enough, it is her body. Just think it’s the kinda tattoo you’re probably gonna regret in a few years for sure. Everyone’s already giving her shit on the internet and it’s probably only going to get worse after she’s slipped off her pants a few times and the lads can’t stop laughing at it before they bone. Just saying it’s hardly the most attractive design to see on someone’s knee in that situation is it?

For more of the same, check out this England fan who got the names of the entire squad tattooed on his leg last year. Dumb.