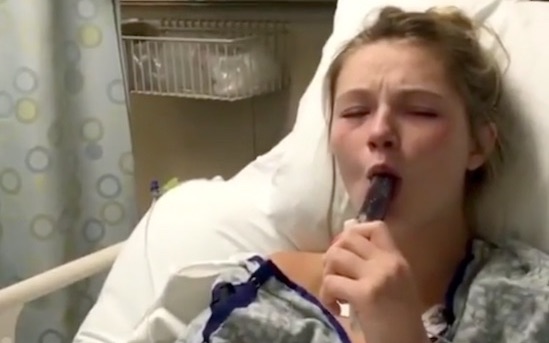 We’ve probably all done some things that we regret when we’re high on drugs – whether they’re issued by the hospital or otherwise – but we definitely all wish that these moments weren’t captured on camera or performed in front of our parents.

Unfortunately for the girl in the video below, both of these situations are occurring concurrently in the video below. She’s recovering in hospital after some kind of operation and clearly high off her face on morphine or something, as that’s the only way we can explain her decision to deep throat a popsicle in front of her mum after describing it as her special talent. Awkward.

Make sure you stay tuned until the end for one of the most killer lines of all time:

Damn. I can’t believe that her family/friends/whoever would actually embarrass her so much by putting that on the internet, but I’ve gotta thank them for doing so because it’s really brightened up my day and I hope it’s brightened up yours too. You’re welcome.