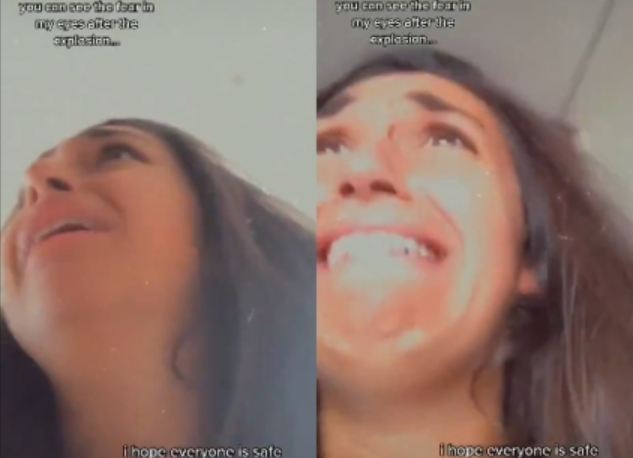 Here’s a collection of terrifying videos of everyday people impacted by the Beirut explosion,

As the days roll by following the devastating explosion in Beirut earlier this week, more and more footage is being shared online showing regular people in everyday situations being impacted by the moment of the blast.

These are images of some of the luckier residents of Beirut – those who were far enough away from the explosion to survive. Like this girl who was recording a TikTok the moment that tragedy struck:

There’s also this terrifying clip of BBC Arabic journalist Maryem Taoumi being knocked over by the force of the blast mid-interview:

A priest who was livestreaming his church service when the explosion interrupted proceedings:

A bride in the middle of a photoshoot – terrifying:

a bridal photo shoot during the Beirut explosion pic.twitter.com/foxL61wuxs

This hero of a nanny/cleaner instinctively carrying a toddler to safety as the explosion hit:

Migrant worker grabs toddler and saves her from shattered glass and windows as the second big explosion erupted in Beirut earlier today. She did not even think. Migrant workers deserve better in #Lebanon – this woman is a hero. pic.twitter.com/BKnEUl7D7J

Crazy to think what this once great and prosperous city and country has already gone through and how little they needed a completely avoidable tragedy like this at a time where they were already rebuilding. I guess the only thing that matters right now though is the recovery efforts and survivors/volunteers on the scene trying to get a handle on things.

That’s not to say Lebanese officials aren’t already investigating. One person they would like to speak to is the Russian businessman who was responsible for the cargo of ammonium nitrate arriving in Beirut in the first place.