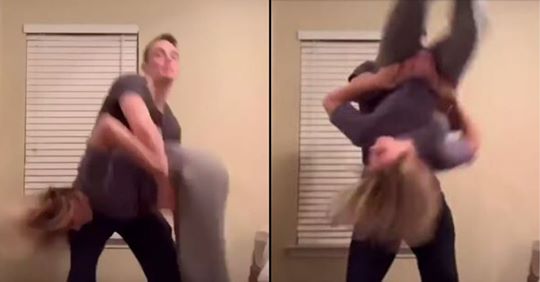 I’ll be honest when I say I’m not really sure why TikTok has become a humongous viral platform when it’s pretty much doing exactly the same thing that Vine did a few years back – i.e. make really short, unfunny jokes/skits – but here we are and people are going absolutely crazy over it.

At least sometimes we do get some pretty funny content from it, although it’s usually the result of an accident, like in the attempted TikTok video below. 19 year old Kendra Colwell was trying to make a video for the social media platform with her 21 year old boyfriend Joe Silwoski in which Joe twirled her around doing a semi windmill kinda move.

I guess they hoped it would look cute or something, but it turned out a little different after Kendra let out a massive stinker in his face during the move. The video went viral instantly and you can see why in the footage below:

@kendracolwell2POV: when you just can’t hold it in 😅 ##couplechallege ##fyp ##foryoupage ##checkthisout

I don’t say this very often but that is a true ROFL moment. And it doesn’t get old – watch it about twenty times now and am laughing my ass of (LMAO) every time. Maybe there is a use for TikTok after all?

For more of the same, check out this study that says smelling your partner’s farts makes you live longer. Looks like Joe just got another couple of years.