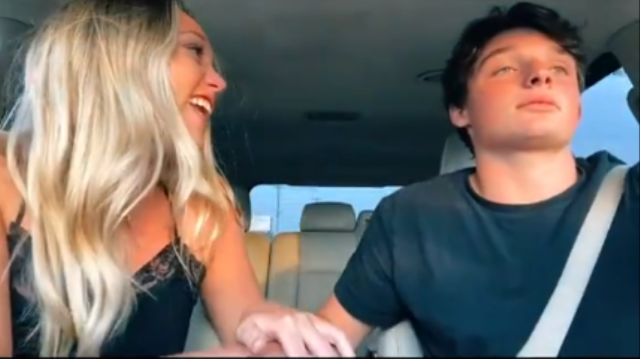 You can actually see the moment his heart breaks.

Calling your boyfriend by your ex-boyfriend’s name and filming his reaction is the big new TikTok trend being popularised by psychopathic girlfriends around the world, and while it might be pretty funny on some level, you’ve got to feel bad for some of the boyfriends on the receiving end of it.

I mean the instant devastation on this poor kid’s face is so palpable I can feel it through the screen:

wHY IS THIS A TREND look hkw hurt he is omshdksnjfns im actually crying pic.twitter.com/uhvepqdk04

Damn that’s cold. Not only did she eat all his food and leave him hungry, she then proceeded to prank him by calling him her ex’s name and caught it all on camera for the lolz. Let’s just say Twitter isn’t seeing the funny side on this one:

that makes me so uncomfortable

why would you do this to someone you love? he clearly loves her. ugh, this really hurts to watch

Ask her to get out of the car.

Too many women game-ify being cruel & then they wonder why men have no respect for them. Doesn’t matter how attractive you look when your personality is dogshit. Hope he leaves her, he can do better than this abuser.

These pretty princess types get off on seeing how far they can push and humiliate a man. There is a lot of shit a man can put up with from a woman but, disrespect isn’t one of them. Silence the rest of the way home and then the “talk”.

You could see how his heart shattered when she said that to when he went to turnt he phone off. 🥺 that’s just horrible. Joke or not he looked really hurt

I’m cute so I can be a cruel bitch teehee

Have to say, the utter manic pleasure in her eyes at successfully trolling her boyfriend and making him feel like shit is pretty concerning, but I wonder if he saw the funny side afterwards? I think what would be messed up is if she uploaded the prank onto TikTok without his permission, but if they both had a laugh about it afterwards, then I guess all’s well that ends well. Unless… she was live-streaming it? In which case she’s a total sociopath who this lad should ditch sooner rather than later.

For another vicious trend involving girls standing naked in front of their boyfriends as they try to play Warzone on PS4, click HERE. Little psychos everywhere.