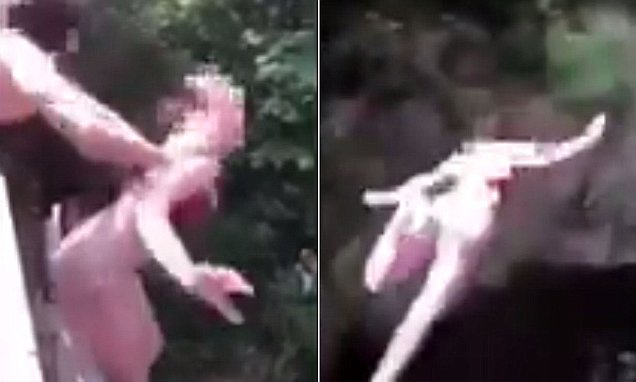 Jumping off bridges/cliffs or anything into the water is some of the most fun that you can have in the great outdoors, but there are always going to be those people who are scared to do so.

Sometimes they manage to get over their fear and have a great time, but other times they need a little nudge from their friends to get them over the line. Normally this is OK and doesn’t really result in anything serious happening except maybe a quick shouting at from your mate, but in the video below it’s way more serious, with a girl plunging 60 feet off a bridge over in Yacolt, Washington and breaking five of her ribs and puncturing her lung. Jesus:

Yeah that doesn’t look so good but the way that she fell was completely ridiculous eh? I guess she was in a state of shock and didn’t have time to react and do something about it but you’ve really gotta think that it’s kind of an unfortunate set of events and not really blame the other girl who pushed her because it was just a bit of fun, right?

Unfortunately if you watched the video you know her mum doesn’t feel that way, and this is what she had to say about it:

My daughter’s gonna have a long road to recovery and I think that she should probably just turn herself in – realise what she did wrong.

This is not okay. She could have killed my daughter.

Well yeah I see what she’s saying and she’s another and everything, but I imagine the girl who pushed her probably feels bad enough about what happened. Not sure if arresting her and charging her with GBH or something is really going to help anything eh?

For more jumps, check out this tragic story about a guy who fell of a bridge and died after jumping for joy following his proposal. Awful.