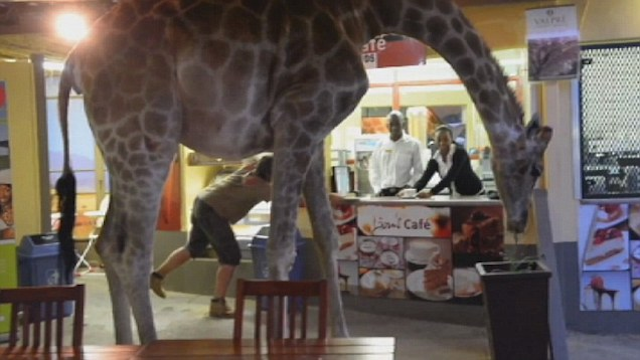 This might sound like a dumb joke, but it actually happened in a bar in South Africa and we’ve got the video to prove it.

There are loads of dumb jokes where animals walk into bars that normally end with the barman saying something like ‘yeah, but penguins can’t talk,’ but a couple of days ago in Johannesburg, South Africa at the Lion Park animal sanctuary a giraffe actually walked into the bar.

The giraffe was called Perdy and he walked into the restaurant part of the bar, took a look around for about a minute and then slunk off. Nothing spectacular or anything, but it’s still a crazy way to spend your lunchtime – as one onlooker says: ‘How can you explain this to someone?’