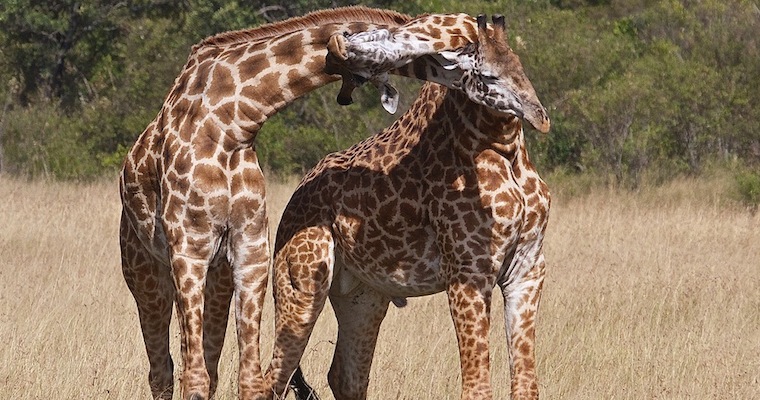 I had never really thought about two giraffes having a fight before I saw this video and it completely blew my mind how they actually perform these fights when they’re trying to chirpse female giraffes.

I have never even thought about the possibility of a giraffe battle even happening before in my life I don’t think. I mean giraffes just seem like really peaceful dudes who just kinda wander around the desert eating plants with their massive tongues and occasionally letting people ride on their backs or whatever. Well apparently I was wrong and sometimes these guys do get into fights and it is completely crazy. How would you imagine giraffes to fight each other? I mean they don’t have any arms right (or if they do they use them as legs, not sure what the technical term for that is) so how would they have a fight? They have nothing to fight with, right?

Wrong. They use their giant necks to fight each other and just swing them round and try and whack each other in the neck with them. Absolutely not kidding on this one but it’s pretty unimaginable, even when you see this video. I thought that giraffe necks were just 100% straight all the time because whenever they’re moving around or anything they are just so stiff and straight that they don’t even look like they’re slightly flexible. But yeah it turns out that they can bend them all over the place like complete and utter badasses. It looks mental in the video though, like some really weird CGI or something that doesn’t even look real or anything. It’s completely awesome though.

Unfortunately the video doesn’t let you see which one of the giraffes actually wins the fight as it wants you to tune in to some show on the Discovery Channel next week. In fairness the photography is gorgeous and if it’s gonna show cool stuff like giraffe fights I might actually be willing to tune in but I mean come on! It’s New Year’s Day, I wanna know which one of these giraffes won the fight. Apparently it’s really rare for giraffes to ever be caught fighting on camera though (and such high quality footage too) so I guess maybe we should count ourselves lucky that we even get to see any of it. But dammit I wanted to see the end of it.

Also see if you can guess what it is that the two giraffes are fighting over. SPOILER – It’s a girl obviously. I guess some things are universal no matter what species you are.