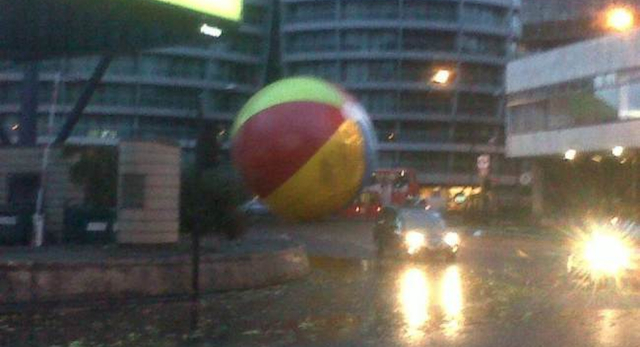 The worst storm in 25 years wasn’t really as bad as everyone had feared, but it did lead to a giant beach ball bouncing around the streets of London.

Everyone was going nuts about this crazy ass storm that was headed our way on Sunday night but I was in Birmingham so didn’t really experience it – which was a bit of a letdown to be honest. I heard that it was a lot more serious for our friends down south, though not as serious as first feared.

However, I doubt anyone could have predicted that the winds would be strong enough to blow a giant beach ball off its perch near Old Street roundabout in London, and bounce around the roundabout for a time before finally being deflated. The ball had been tethered near Old Street station to symbolise the CO2 emissions that a new £200 million development would be cutting back on. It was 10m wide, so a big problem for commuters trying to tackle the roundabout.

The ball started to deflate immediately following its untethering, but it still posed a danger to passersby as something that huge would take a while to get rid of all its gas and not be in the way of everyone. A councillor explained that it was actually the quick thinking of a government employee – who just happened to be passing at the time – that averted any accidents: ‘Although it had already started to deflate, it was still in the middle of the road. No one else appeared to be trying to remove it, so he dragged it to the centre of the island then used his car to prevent it being blown away.”

The ball was finally removed around 10am, having first blown off the roof around 6am.

Here are a few pictures of it bouncing around which almost make the storm look like the disaster movie everyone thought it was going to be:

â˜› More Balls: This Is What The Inside Of A Golf Ball Looks Like And It Isn’t What You Think It Would Look Like 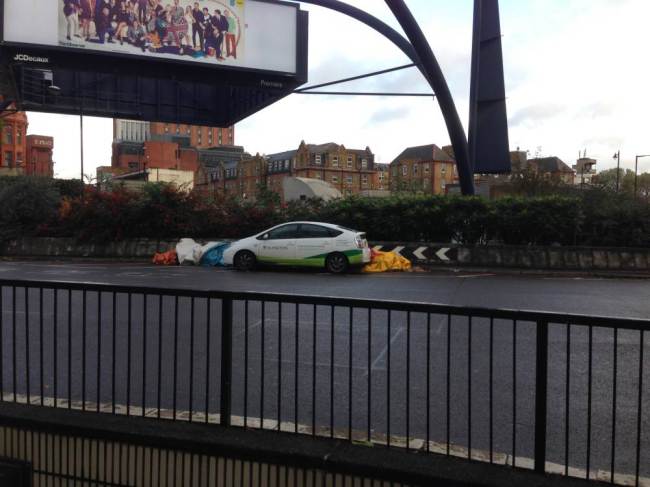 The mystery beach ball is now no longer 🙁 a sad day at old street …. pic.twitter.com/BlwZkgBlKE