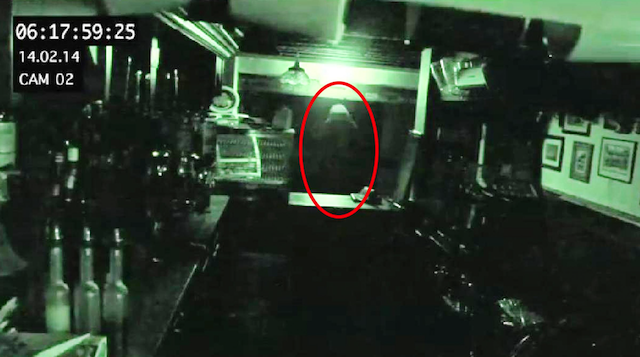 This is actually pretty terrifying.

This could all be bullshit of course but it looks kind of real and terrifying, at least more real and terrifying that wank like Derek Acorah. It all went down at Ye Olde Man And Scythe pub in Bolton – which is the fourth oldest pub in England, aged 763 – on Valentine’s Day at 6:18am.

In the video, the lights are flashing and it’s kind of spooky and then out of nowhere you can pretty much clearly see the outline of some scary looking dude looking pretty ominous. He then disappears and the camera keeps filming for a bit before inexplicably cutting out at 6:18am. Freaky.

The manager of the pub – a dude by the name of Tony Doolley – discovered the footage when he came down into the pub on the morning of Valentine’s Day and saw a broken glass on the floor. He was immediately suspicious so checked the CCTV and found the footage of the mysterious figure. Tony know thinks that the ghost was responsible for smashing the glass on the floor.

The pub is reportedly haunted by the 7th Earl Of Derby James Stanley. His family owned the inn and it’s believed that he spent the last hours of his life there in 1651, before he was beheaded towards the end of the English Civil War. The chair that James used to sit still sits in the pub and it’s this that makes people believe that he’s haunting it.

Hundreds of soldiers and civilians were killed outside the pub in the Bolton Massacre in 1644 too and it is believed that some people from this act of violence also haunt the pub. In fact, psychics (probably including Derek Acorah) have claimed that up to 25 spirits haunt the pub.

I’m not sure if I believe it, but that video certainly is fairly scary and completely weird/unexplainable. Thoughts?