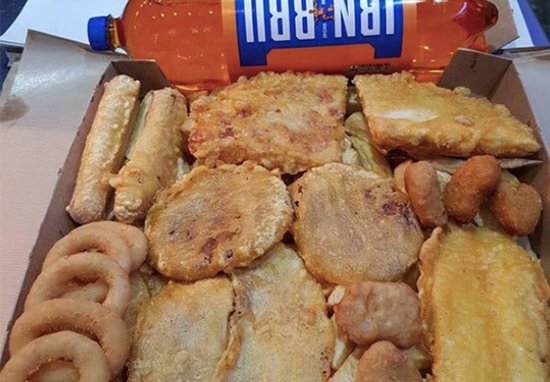 There are a number of eating challenges and disgusting excessive takeaways all over the world, but people are never satisfied so they just keep getting bigger and more ridiculous.

A chippy in my hometown is selling this 'crunch box' for a TENNER and if you don't think it looks like the most appetizing thing ever then there's no hope for you. pic.twitter.com/BzKhYbEFWF

I mean even if literally everything wasn’t deep fried there, it would be way, way too much for one person to eat. I’m sure some people up there are going to try though. Or just buy it and live off it for about a week – either/or. Thanks for Ross mcCafferty for bringing it to our attention.

Bahadur Singh – the manager of East West Spice – explained his mentality behind devising such a monstrosity of a takeaway:

I just thought it would be nice to combine the ideas and bring something which would appeal to everyone.

We put the deal on and people seem to love it. Everything is cooked in fat but the dish is big enough for three or four people to share.

It’s definitely for the family to eat. People think it’s a great deal.

I mean I can see what Bahadur is saying here, but if this was really the case why is he only including two battered sausages and two battered hamburgers? Surely he should be including at least four of each so everyone in the family gets one? Can see a lot of fights kicking off at the dinner table ove who gets the last battered hamburger – am I right?

For more takeaways, check out the most dangerous street in the country to get a takeaway on. Be careful.