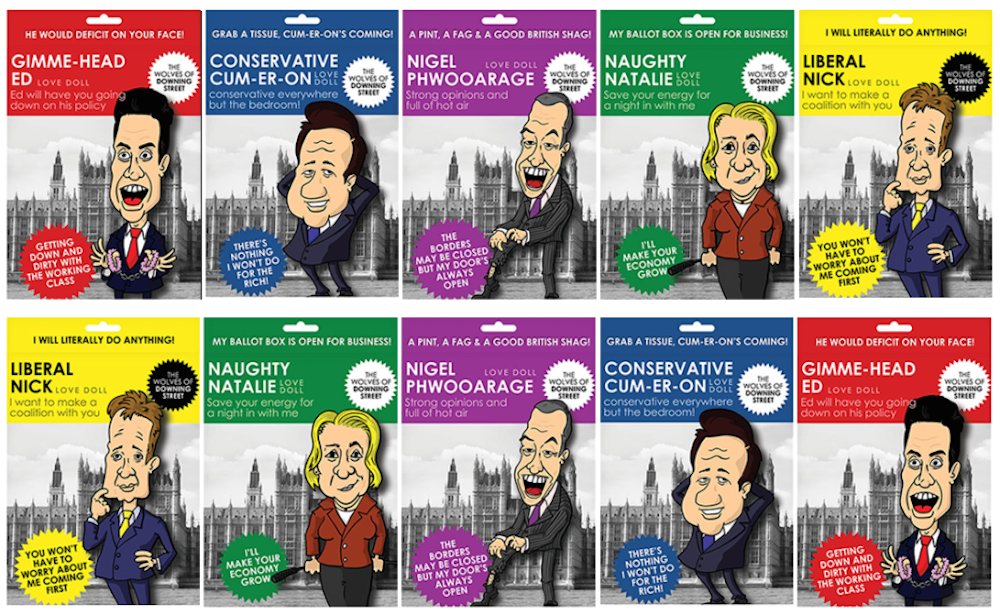 Of course you can.

As if there wasn’t enough hype about the upcoming general election already (how could there not be with David Cameron eating a hot dog with a knife and fork and Ed Milliband admitting he doesn’t know what YOLO means?), a company named Bondara have decided to take it up a notch by releasing comedy sex dolls of all the major candidates. They’ve even produced a television advert for their campaign which they’ve ‘hilariously’ entitled the general erection. I bet it took their marketing department all day to come up with that one.

In the advert below and on the following slides, you can see the likenesses of all five of the main political candidates for the election, all given loving ‘erotic’ names: Conservative Cumer On; Gimme Head Ed; Liberal Nick; Nigel Phwooarage; and Naughty Natalie. Again, it must have been a long creative brainstorming meeting to come up with those. The bad news is that you can’t actually buy these (I’m sure you’re all completely gutted about that) and that only one of them will actually be manufactured for public consumption following an online vote. Don’t all rush at once, although they’re probably better quality than a home made sex doll.

If you want to see the potential packaging for each of the dolls – which incidentally feature some great puns – then check out the slideshow.