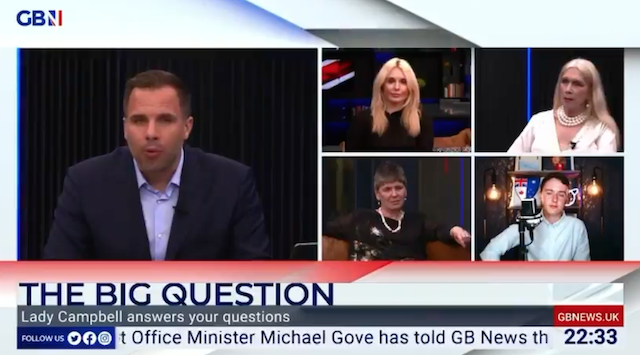 I really wasn’t going to get into the launch of GB News because it already seems like those guys are having enough trouble without some dumb website ripping into them – I’ve only really caught people laughing about all the technical issues they’re experiencing on Twitter – but this clip from one of their interview segments last night really was too much to ignore.

I’m not sure of the context here, but the guy seems to be interviewing Lady Campbell about Prince Andrew and Jeffrey Epstein and the fact that they’re both paedophiles and how that should probably reflect worse on the Royal Family than anything that Harry and Meghan are currently doing. Surprisingly, she seems desperate to defend their association, first claiming that Epstein wasn’t technically a paedophile – as that term refers to sex with pre pubescent children – and then drawing attention to the fact that Bill Clinton was a much bigger friend of Epstein than Prince Andrew.

OK so I’m going to try and play Devil’s Advocate here and argue that the points she’s making are probably correct and relevant, but the fact is that like the presenter said, Jeffrey Epstein is 100% an evil motherfucker and Prince Andrew shouldn’t have been involved with him. It doesn’t matter on the exact level of Epstein’s crimes or if someone else has been involved more with Epstein than him, it’s still a really bad idea that he was even there in the first place and should reflect worse than any dumb shit that Harry and Meghan are doing, so quit trying to deflect attention away from him you idiots.

Of course, some people out there are absolutely going to lap this shit up, so is it a good thing that GB News exists for conspiracy theorist idiots and extreme nationalists? I don’t think so but it’s hardly a surprising development the way things have been going in this country.

Also I know that the clip has been fairly cleverly edited to reflect the stupidity of what she’s saying and there may have been more points made either side of what she’s saying to flesh it out, but even so this seems like a particularly ridiculous opinion. Not sure what could have beens said to justify it really.

For more of the same, check out when Prince Andrew blinked 10 times in 10 seconds when asked if he had sex with a minor. That was a classic moment.