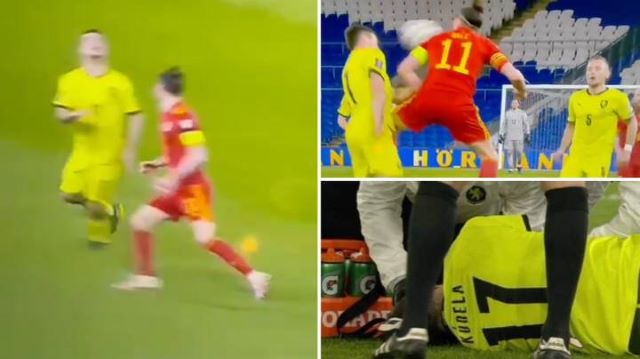 Slavia Prague’s Ondrej Kudela is probably the most hated person in football right now, owing to the (alleged but highly likely) racist abuse he directed at Rangers player Glen Kamara during a Europa League game earler this month.

Major scandal in European football tonight. Slavia Prague advanced to the next round of #EuropaLeague after defeating Glasgow Rangers but Slavia-player Ondrej #Kudela was beaten up after the game by the rangers team after allegations he said smth racist pic.twitter.com/yqGrmKolMB

A tricky situation no doubt, as although Kamara’s allegations seem entirely sincere and are backed up somewhat by the footage, there’s no way of categorically proving that Kudela said anything racist, and so it seems he will go unpunished off the pitch. The good news is he now has a giant bullseye on his back on the pitch, and there’ll be no shortage of footballers out there itching to lay into him when they get the chance.

Like Gareth Bale during the Wales/Czech Republic game last night:

You love to see it. The way he glances over his shoulder to make sure Kudela is standing right where he needs him before swinging the elbow into his face was a thing of beauty. Better still is that Kudela was subbed off immediately afterwards as I guess he wasn’t able to continue, and his team went on to lose the game 1-0. Great stuff all round.

Kudela’s Slavia Prague take on Arsenal in the next round of the Europa League on April 8th – maybe someone like Xhaka will serve him up some seconds. Wouldn’t that be terrible?

For the Guatemalan footballer facing punishment after bashing himself with a rock to fake an injury, click HERE.