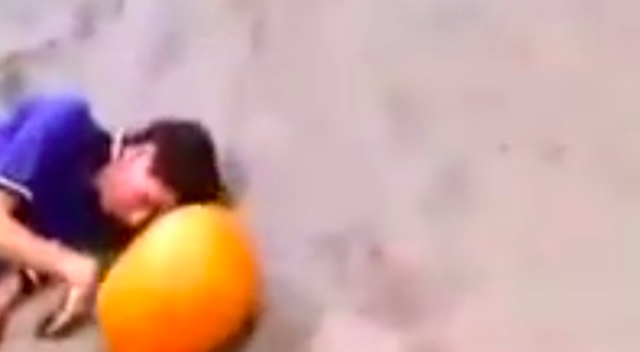 This shocking footage from Memphis, Tennesse emerged over the weekend of a gang of teenagers beating up a random guy to the point of unconsciousness and then stamping on his head and throwing humongous pumpkins on it. Brutal.

It all took place in the parking lot of a Kroger grocery store on Saturday night. Two teenage store employees ran to help the 25 year old shopper, but they too were knocked out and had pumpkins thrown on top of them. Eventually a security guard for the store was able to break it up, which is just as well as it looks as though something seriously bad might have happened if he hadn’t. I mean there are about 125 kids beating on this one guy, it’s fucking terrifying.

One witness said that the victim was attacked for no apparent reason and that the youths were playing a game similar to the Knock Out game that hit the streets of New Jersey last year, where thugs would knock out random people as they walked down the street:

The game was called ‘Point ‘Em Out, Knock ‘Em Out’, where they would point someone out and attempt to knock them out or fight them. There was no real reason behind it. They followed hitting him with a pumpkin. He was already unconscious, so all you could see was blood and pumpkins.

Let’s hope that this gets locked down quickly, because I do not want to be walking around fearing that I might get knocked out by some little twat at any minute. Call me old fashioned, but that is just not what I want to deal with when I’m doing my grocery shopping.