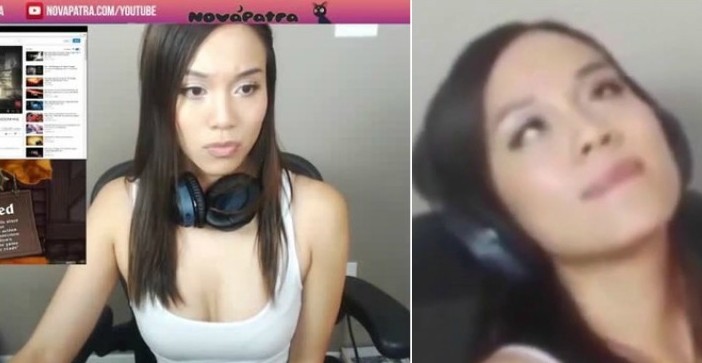 Female gamer Nova Patra from Canada is popular with her online buddies for her sick skills on games like Hearthstrone. Gnarly dude.

Anyway, she gained even more popularity not so long ago after she accidentally forgot to turn her live stream off after a riveting game and ended up getting herself off in front of what I’m guessing were delighted viewers from across the globe.

OK, so the first bit is really convincing – but the crossed eyed fapping? I don’t know any girl who genuinely goes cross eyed when they’re having an orgasm. But then again maybe I just haven’t met one yet.

Some people also argue that the solo sex session was genuine, but she simply left the live stream going on purpose in order to boost her popularity. I mean it would probably be a lot easier to break into the webcam industry if you’d already amassed a whole load of gaming nerds beforehand right? Perhaps that’s the direction Nova Patra is going in, in which case she pretty much nailed it with her cross eyed live stream wank.

For a slightly less sexy, slightly more embarrassing video, check out this gamer who forgot to turn his live stream off and ended up having a wank in front of his buddies. Awkward.